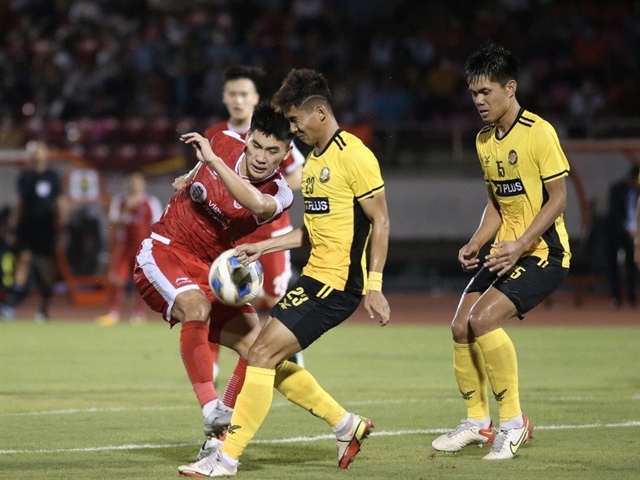 Nhâm Mạnh Dũng (left), Việt Nam’s hero at the SEA Games 31, marked his first match at the AFC Cup 2022 with a goal to seal the 5-1 win for Viettel. Photo zingnews.vn

Despite conceding early with a goal from Bounphachan Bounkong, Pedro Paulo’s hat-trick alongside goals from Nguyễn Đức Hoàng Minh and Nhâm Mạnh Dũng helped the capital side complete a great comeback, winning 5-1.

Park Hang-seo’s former assistant Bae Ji-won, on his first match managing the club, started the match without captain Bùi Tiến Dũng. However, the big gap between the two teams was clear, with chance after chance for Viettel’s Geovane Magno right from the off.

Just when everyone was thinking about an easy night for Bae’s men, the Young Elephants showed why they are a top team in Laos, with an opening goal to silence the whole crowd.

In the 6th minute, from a counter-attack, the ball was fed quickly upfront for Lucas Paulista whose shot from long range wasn’t hard but still made Viettel’s goalie Quàng Thế Tài fumble, and the ball fell to Young Elephants’ captain Bounphachan to score an easy rebound.

Tài’s mistake hit his team hard. The next 30 minutes saw the men in red create many chances but miss them all as Pedro twice failed to beat Outthilath Nammakhoth in one-on-one situations and Hoàng Minh missed the target from two close-range shots where he should have done better.

However, against the constant pressure from Pedro and Geovane, two of the best V.League foreign players, the Laos defence couldn’t maintain their momentum and collapsed after 33 minutes.

From Văn Hào’s excellent cross on the left, Geovane received the ball after a cheeky movement behind the opponent’s defence and shot hard toward Outthilath’s goal but the 25-year-old keeper once again pulled off a superb save.

It looked like another miss for the Vietnamese team, until the ball deflected to Pedro who was waiting and equalised with a stunning bicycle kick.

It was at this moment that Young Elephant was put in their place, as the remainder of the match saw Viettel’s complete dominance.

And right before the break, Viettel added another goal after Nguyễn Đức Hoàng Minh capitalised from Pedro’s pull back to fire home, ending the first half with a 3-1.

And the pair didn’t let the home supporters down, and Mạnh Dũng put the final nail in the coffin in the 80th minute, ten minutes after Pedro completed his hat-trick.

With the win, Bae Ji-won made a good start with Viettel as the team grabbed their first three points, and the top spot in group I.