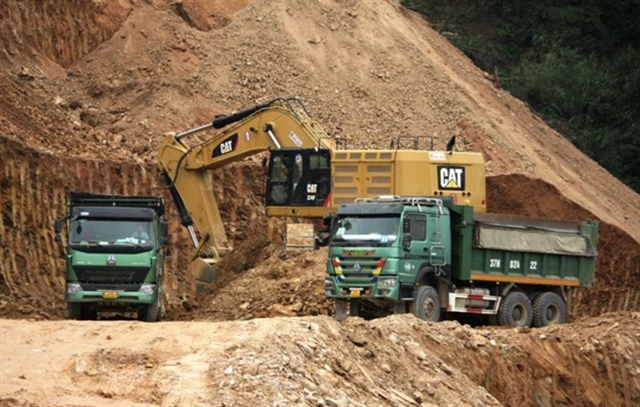 A section of the North-South Expressway under construction. The project’s progress is affected by unusual weather and price hikes in fuel and construction materials. — VNA/VNS Photo Việt Hùng.

HÀ NỘI — The progress of the North-South Expressway is facing difficulties, especially in four specific component projects that must be completed by December 31, due to unusual weather factors and price hikes in fuel and input materials.

Weather and increasing prices of materials are obstacles to the construction progress, forcing the Ministry of Transport to frequently direct project management boards and contractors to expedite the works to complete contracts on time, the ministry said.

The deadline for the four components projects of Mai Sơn-Highway 45, Cam Lộ-Sơn La, Vĩnh Hảo-Phan Thiết, and Phan Thiết-Dầu Giây is the end of this year but this might be seriously affected if the weather is not favourable.

According to Lieutenant Colonel Trần Hữu Hoàn, who is the manager of the 13-XL bidding package of the Mai Sơn-Highway 45 project, his unit was in charge of building 5km of roads and three bridges, which has reached 72 per cent of the contract volume.

However, the project construction is in the provinces of Ninh Bình and Thanh Hóa, which have had much rain that badly affected progress, Hoàn said.

“At the final stage of construction, we were increasingly worried about the weather because if it rains, asphalt carpeting and many other things cannot be done,” Hoàn said.

Hoàn’s worry was real because from May 2022 to the end of June, the weather in the North was forecast to change abnormally, with the number of rainy days and the amount of rain much higher than in previous years.

The provinces of Ninh Bình and Thanh Hóa will have more about 18 rainy days that will severely affect construction.

Meanwhile, workers at the Cam Lộ-Sơn La project are taking advantage of favourable weather to work day and night to complete six out of 11 bidding packages to meet the deadline this month, said Lê Sáu, deputy head of Hồ Chí Minh Expressway Management Board.

“The weather had never been as unusual as this year. Rain for two to three days makes construction stop for three to four days to wait for the site to dry,” Sáu said.

“The bidding packages of soil filling were the most affected. Currently, we have to monitor weather changes every day to oversee the construction closely.”

According to the report by the Hồ Chí Minh Expressway Management Board, the construction output of the Cam Lộ-Sơn La project so far has reached about 87.6 per of the contract value, but is 1.53 per cent behind the plan.

One of the major reasons for the project’s delay was because of 22 rainy days in Quảng Trị and Thừa Thiên-Huế provinces.

Meanwhile, the Vĩnh Hảo-Phan Thiết project’s construction progress reached 40.85 per cent of the contract value and was delayed due to the rains that lasted from April to June.

Phan Thiết-Dầu Giây project has 3.8 per cent of the contract value left uncompleted.

According to the Ministry of Transport, last year, the provinces of Ninh Bình, Thanh Hóa, Quảng Trị and Thừa Thiên-Huế, that have six out of 11 component projects of the North-South expressway sited, had a total of 100 rainy days.

From earlier this year until now, rain fell in Thanh Hóa and Nghệ An provinces. Notably, there were about 20-33 rainy days in the dry season in April.

Bình Thuận and Đồng Nai normally have little rainfall, but in April this year, there were 26-30 rainy days.

Price hikes in fuel and materials

The constantly increasing price of fuel and materials has also pushed many contractors into difficulties, as there is no timely support for price adjustment.

Nguyễn Hữu Tới, vice general director of Vinaconex Corporation, said that at the time of signing the contract for package No. 4 of the Phan Thiết-Dầu Giây project, the price of soil for embankment was only VNĐ85,000 (US$3.66) per cu.m but now it was VNĐ116,810 per cu.m, increasing by 37.42 per cent, while asphalt price at signing time was at VNĐ11,421 per kilo but now it jumped to VNĐ15,500.

The cost of price fluctuations of construction materials (excluding the cost of changing construction machines and labour) as compared to the current contract value is about VNĐ468 billion, increasing by 16.7 per cent, while the price offset ratio according to the contract formula is averaged at 8 per cent so far.

The bidding package of the Phan Thiết-Dầu Giây project is worth VNĐ1.6 trillion, excluding reserve funds.

The cost of price fluctuations of construction materials (excluding the cost of changing construction machines and labour) as compared to the current contract value is about VNĐ626 billion, up to 39 per cent, while the price offset ratio according to the contract formula is averaged at 3.8 per cent so far.

According to a representative of a project management board, for an expressway project, fuel usually accounts for 8-10 per cent of the cost of the construction bidding package and construction materials of iron, steel, sand, stone, cement, asphalt, concrete and earth fill account for about 35-45 per cent of the package.

Minister of Transport Nguyễn Văn Thể said that currently, contractors were constructing foundations and pavements, so they needed to mobilise huge financial resources. However, many localities still published quarterly price indexes, even though so far, some only published price indexes for the fourth quarter of last year or the first quarter of this year, which led to an untimely price adjustment.

Despite escalating prices, some serious contractors had still fulfilled their responsibilities as contracts were signed. However, some contractors were hesitant, waiting for fuel and materials prices to drop to continue, Thể said.

Currently, the Ministry of Transport has assigned the project management boards to co-ordinate with contractors to control work diaries to ensure the construction progress and make payment later in accordance with price adjustments.

The minister said that any contractor encountering difficulties must ask for support to complete the work on schedule, not slowing down the project progress due to price hikes.

“If contractors published and make the construction cost transparent, the ministry will focus on determining the workload and shortening the payment time so that they will not suffer losses during the construction process,” he added. — VNS