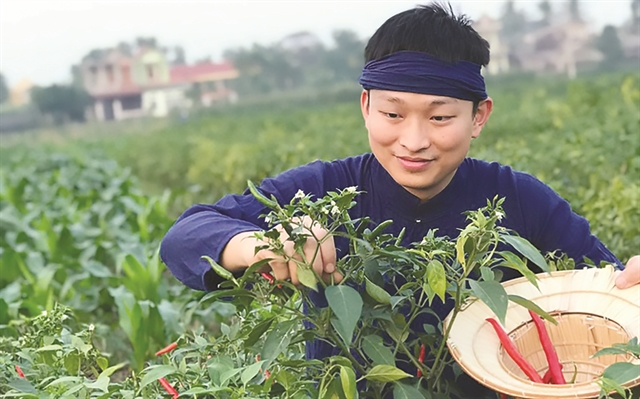 Cương, 30, from the central province of Thanh Hóa, graduated from university with a tourism major in Singapore in 2014.

He then worked for a foreign enterprise in HCM City with a salary of about US$1,000 per month.

Instead of feeling satisfied, Cương followed his dream of making clean food with his hometown’s brand name.

Cương told the Dân trí e-newspaper that while studying abroad, he went to many countries and found that their agricultural products were very beautiful and enjoyed strong exports. Việt Nam also has many agricultural products, but little is known because of the bad design.

He quit his job in 2016 and returned to his hometown to start a clean food business using gấc fruit (Momordica cochinchinensis).

“I started with refined products from gấc fruit such as gấc oil and supplemental foods, then continued with dried local fruits. But after three years I had to stop due to poor technology, high prices and a shortage of capital,” said Cương.

Sometimes, Cương had to sell drinks to pay salaries.

“This was an expensive lesson for me,” he said.

Cương decided to spend a year studying the market. He travelled to the countryside to research and find suitable products, then he chose to produce chilli sauce.

He searched for recipes for chilli sauce online and then made it based on his own taste. After about 50 experiments, the chilli sauce product was born, and he decided to restart his business.

Cương used all of his savings, about VNĐ45 million ($1,980) to buy an industrial crusher to make chilli sauce.

He said that at that time he bought tonnes of chillies from his hometown.

But he did not use all the chilli in time, so it was damaged, and he once again suffered heavy losses.

Next year, local residents wanted to supply him with fresh chillies. Since then he has had an abundant supply source.

During his time off from business, Cương contacted the Dutch PUM organisation – an organisation specialising in supporting small businesses.

When Cương was satisfied with the chilli sauce product, he founded a company, invested in equipment and machinery for production.

The chilli sauce he makes is sold to retail stores and online, receiving praise from customers.

Chilli sauce with many flavours

Cương said that his chilli sauce needed up to 12 steps in the production process, from harvesting the chilli fruit, processing, to packaging and supplying to the market.

He actively searches for a source of safe raw chilli, following the production process according to Vietnamese Good Agricultural Practices (VietGAP) standards.

The Spico chilli sauce has its own product lines with a variety of flavours and strengths.

After having success with chilli sauce, Cương continued to develop ketchup.

Now, he covers safe agricultural products such as chilli and tomatoes for farmers in Hoằng Hóa and Thiệu Hóa districts in Thanh Hóa Province.

Cương said that the difference of Spico chilli sauce was that it had no preservatives and no flavour enhancers.

Fresh chilli and tomato account for a high percentage of the ingredients, from 60-70 per cent, while in industrial soy sauce bottles, this only accounts for about 20 per cent.

“Another special feature is that the product is contained in a glass bottle to ensure its original taste. The bottle can be recycled, contributing to environmental protection, making it easy to sterilise products by autoclaving at high temperatures,” he said.

In 2020, he sold about 30,000 bottles of sauce of all kinds, earning over VNĐ1 billion ($44,150) in revenue. But, because it is a new business, the profit was only about 10 per cent and it is also used to reinvest in production, buy machinery and renovate the workshop.

“I have always prioritised improvement so that the product is completely sterile. The chilli will ferment in a sealed jar with pasteurised filtered water. It will then be boiled and undergo a sterilisation process. Customers can use it with peace of mind,” said Cương.

In February, many of Cương’s samples are still very good after one year, so he re-registered the expiry date from nine months to one year. — VnExpress News