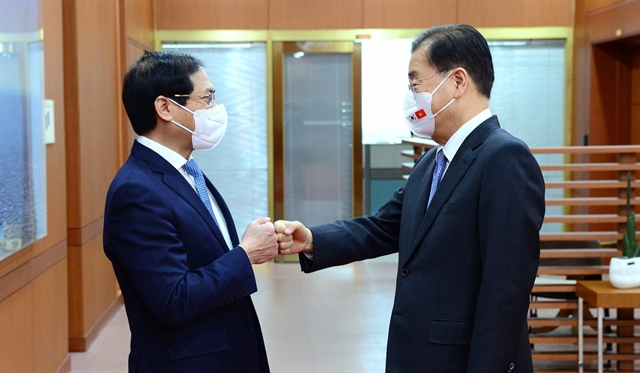 HÀ NỘI Minister of Foreign Affairs Bùi Thanh Sơn on Thursday met with his South Korean counterpart Chung Eui-yong, as part of his official visit to the Republic of Korea (RoK).

The two ministers reviewed the significant achievements of the 30-year relationship between the two countries, and discussed in-depth measures to take their strategic partnership to the new level.

Both sides agreed to put the focus of 2022 on celebrating the 30th anniversary of the establishment of their diplomatic relations, and on upgrading it to a comprehensive strategic partnership.

They also agreed to organise visits between State leaders and further implement cooperative mechanisms that will benefit both countries.

The RoK’s Minister of Foreign Affairs Chung expressed his delight at welcoming Vietnamese Foreign Minister Sơn right after the two countries celebrated the New Year, stressing that the visit is an opportunity for both sides to discuss directions of their future relationship.

Foreign Minister Sơn said Việt Nam treasures their relationship and wants to deepen cooperation with the RoK in different areas, from diplomacy, national defence and security to economics, commerce, and investment.

The Vietnamese official expressed his hopes of increasing bilateral trade turnover to US$100 billion in 2023 and $150 billion in 2030, and invited more South Korean businesses to invest in Việt Nam in the fields of high technology, renewable energy, digital transformation, and the industries of the future.

He also asked the RoK for more technology transfer activities, and more research and development centres to be built in Việt Nam.

The minister requested that the RoK speeds up procedures to recognise Việt Nam’s vaccine passports and continue to support the country in the fight against the COVID-19 pandemic. He asked the RoK’s Government to care for and support Vietnamese people living in South Korea.

In his response, the Minister of Foreign Affairs Chung said Việt Nam is a leading partner of the RoK, and gave suggestions on measures to strengthen their collaboration in the fields of politics and diplomacy, national defence and security, economics and commerce, medicine and technology, and culture.

The South Korean Ministry of Foreign Affairs will continue to closely collaborate with his Vietnamese counterpart to promote the two countries’ strategic partnership in the future, he said.

Foreign Minister Sơn congratulated the RoK on successfully organising the first Ministerial Conference of the Southeast Asia Regional Programme (SEARP), which is run by the Organisation for Economic Cooperation and Development (OECD), in Seoul on Wednesday, and on completing the role as the organisation’s co-chair for the 2018-22 period.

Việt Nam will actively coordinate and promote ASEAN-South Korea relations towards their 35th anniversary in 2024, he said.

Việt Nam will also collaborate with the RoK to promote inter-Korean dialogue and cooperation to contribute to the peace process and denuclearisation of the Korean Peninsula, he added.

Sơn hopes Việt Nam and the RoK will further collaborate to maintain peace, stability, and legal order at sea, respect freedom of navigation and overflight, settle disputes in the East Sea by peaceful means on the basis of international law – including the UN Charter and the UN Convention on the Law of the Sea (UNCLOS) 1982 – and support ASEAN and China on developing the Code of Conduct in the East Sea (COC).