HÀ NỘI – President Nguyễn Xuân Phúc received the newly-appointed ambassadors of Mexico and the US, who came to present their credentials to the Vietnamese leader in Hà Nội on Friday.

At the reception for Mexican Ambassador Alejandro Negrin Munoz, President Phúc said he believed that the diplomat will excellently fulfill his term of office in Việt Nam to help bolster the traditional friendship and multifaceted cooperation between the two countries.

Munoz noted with satisfaction that bilateral cooperation has been growing well over the last 47 years, expressing his hope that Việt Nam and Mexico will set up a strategic partnership, which will be a basis for further augmenting their collaboration. 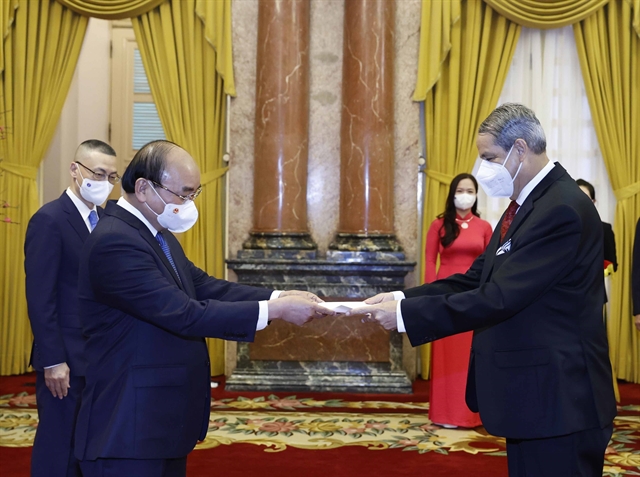 The Vietnamese President said the bilateral ties have been thriving unceasingly in the recent past as seen in the maintenance of all-level meetings, along with the continued promotion of the political consultation and the joint committee on economic, trade, and investment cooperation. Mexico is currently the second largest trade partner of Vietnam in Latin America with bilateral trade approximating US$5.2 billion, he said.

Việt Nam will work closely with Mexico to increase high-level meetings and cooperation in defence, finance, customs, agriculture, and education, he affirmed.

As both countries are members of the Comprehensive and Progressive Agreement for Trans-Pacific Partnership (CPTPP), President Phúc said they should expand partnerships to new areas and remove obstacles in a timely way to develop their ties in a comprehensive, sustainable, and substantive manner.

He also called on Mexico to back Việt Nam’s candidacy for a seat in the UN Human Rights Council for the 2023 – 2025 term, and for continued mutual support at multilateral forums.

The President wished Mexico success as a non-permanent member of the UN Security Council for 2021 – 2022 and, via the ambassador, invited his Mexican counterpart Andres Manuel Lopez Obrador to visit Việt Nam at an appropriate point of time. 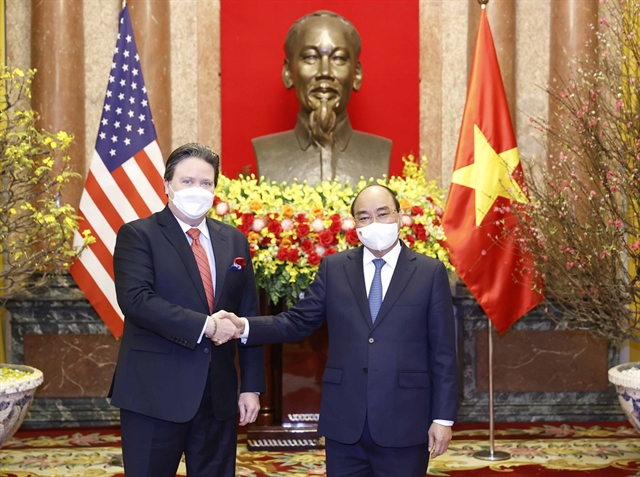 Congratulating Marc Evans Knapper on his appointment as the US Ambassador to VietnamMarc Evans Knapper, the new US Ambassador to Việt Nam, President Phúc welcomed the diplomat’s return to Hà Nội, and spoke highly of Knapper’s performance while working in Việt Nam during 2004 – 2007, which greatly helped promote relations between the two countries.

Recalling the visit to Việt Nam by US Vice President Kamala Harris last August, President Phúc noted the Việt Nam-US comprehensive partnership has been developing more intensively and practically. Bilateral trade hit a record of $111 billion in 2021, turning Việt Nam into one of the 10 largest trade partners of the US, he added.

He thanked the US for the provision of 24.6 million doses of COVID-19 vaccines for Việt Nam, assistance in response to climate change, and cooperation in settling war aftermath and building mutual trust.

The State leader expressed his belief that during his term of office in Việt Nam, the ambassador will contribute more to the bilateral ties.

For his part, Knapper held that the Việt Nam – US relations will develop further in the time ahead, pledging all-out efforts to promote their cooperation, particularly in trade, investment, education, defence, and security.

He also voiced his delight at the US’s vaccine assistance for Việt Nam amid the COVID-19 pandemic and expressed his hope that when the outbreak is gradually put under control, the two countries will organise many high-level mutual visits. VnExpress News