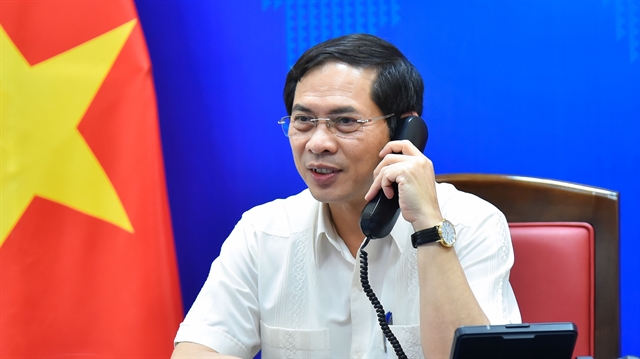 HÀ NỘI — Minister of Foreign Affairs Bùi Thanh Sơn tested positive COVID-19 during his visit to Cambodia and had to attend the ASEAN Foreign Ministers’ Meeting Retreat on Thursday via videoconference.

“I would like to wish swift recovery to our colleague Bùi Thanh Sơn, who tested positive on his arrival,” Sokhonn said in a speech during a welcome dinner for ASEAN foreign ministers, held in-person for the first time in two years.

Spokesperson for the foreign ministry Lê Thị thu Hằng said after the conference ends, Sơn would return to Việt Nam and follow medical quarantine as per regulations.

This is the first high ranking Vietnamese official to have been publicly confirmed to  have contracted COVID-19.

During the meeting, the Vietnamese representatives participated in discussions on ASEAN’s priority agendas and cooperation orientation in 2022 as well as a number of international issues, including areas of mutual interest such as the South China Sea and Myanmar.

According the Ministry of Foreign Affairs, regarding the South China Sea, ministers expressed concern about complex developments, undermining peace, security and stability in the region as well as damage to the marine environment.

The foreign ministers reaffirmed ASEAN’s principled stance, including the rule of law, self-restraint, refraining from threats, peaceful and settlement of disputes on the basis of international law, including the 1982 United Nations Convention on the Law of the Sea.

Regarding the Myanmar issue, the ministers agreed that ASEAN would continue to make efforts to support Myanmar to find a sustainable solution to the current crisis through the five-point consensus. — VnExpress News