Deputy PM busy with meetings on threshold of WEF summit 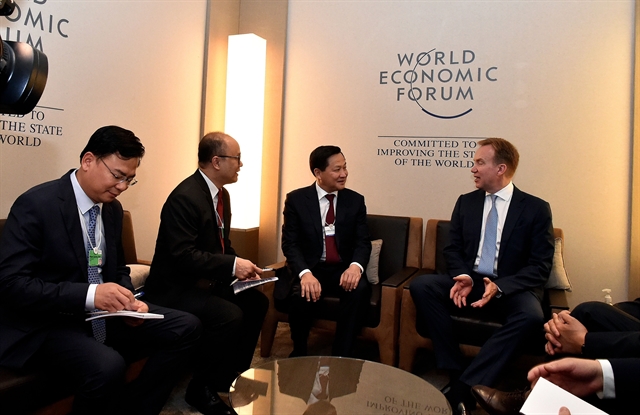 At his meeting with British Cabinet Minister and President for the 26th United Nations Climate Change Conference (COP26) Alok Sharma, Khái said that Việt Nam had been implementing many overall and comprehensive measures in the field of energy transition and growth model transformation towards a green and circular direction to realise commitments made at COP26.

The official underlined that ensuring energy security for growth and reducing emissions at the same time was a very complicated problem that would require the support of the international community in terms of resources, technology, and governance capacity. Therefore, he said that Việt Nam hoped that the UK, the European Union (EU) and other member states of the Group of Seven (G7) would soon make specific commitments to supporting Việt Nam in this area.

For his part, Sharma held that Việt Nam had made a proper decision to announce the net-zero emission commitment at the COP26, lauding Việt Nam’s efforts to realise the commitments, especially the formation of a national steering committee for implementing COP26 commitments to be led by the Prime Minister.

He held that Việt Nam boasts high potential in renewable energy, noting that at the meeting in March 2022, at the proposal of the UK, G7 members agreed to include Việt Nam in the list of the countries prioritised by G7 for energy cooperation. He said he hoped that G7 countries and Việt Nam would soon reach a cooperation agreement on a fair and sustainable energy transition. 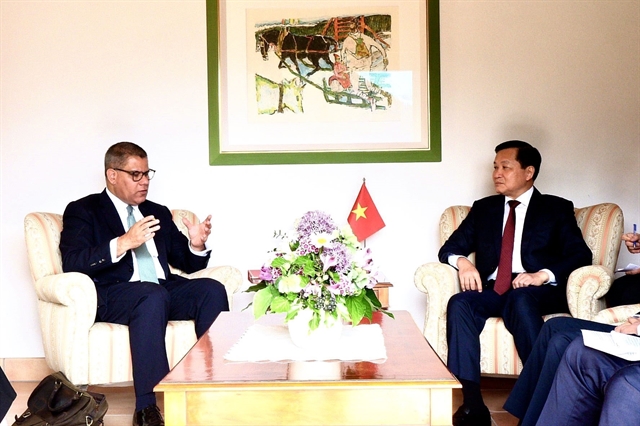 At a meeting with WEF President Borge Brende, Khái conveyed PM Phạm Minh Chính’s best regards to WEF Founder and Executive Chairman Professor Klaus Schwab. The Vietnamese Deputy PM suggested that the WEF continue to promote its role as a bridge between the Government and businesses in the process of shaping development trends and promoting new growth engines.

The two sides shared pleasure at the practically and sustainably growing partnership between Việt Nam and the WEF. Deputy Prime Minister Khái stressed that Việt Nam was focusing on building an independent and self-reliant economy, while continuing to promote extensive, comprehensive and effective international integration and improving the country’s position in global supply chains.

The WEF President showed support to development orientations and perspectives of Việt Nam, expressing his wish to continue promoting the Việt Nam – WEF partnership, especially in speeding up digital transformation, optimising achievements of the Fourth Industrial Revolution, developing sustainable agriculture, and promoting energy transformation and personnel training. The WEF will continue to coordinate with Việt Nam to organise the second National Strategic Dialogue in the future.

He said that Việt Nam was completing Power Development Plan VIII (PDP VIII) and heading to the national energy transition process. He noted that Việt Nam would need 100,000 MW of power in 2025 and 150,000 MW in 2030, with the demand for renewable energy of more than 36,000MW in 2025 and nearly 50,000MW in 2030. Total demand for renewable power accounted for about 30 per cent of the country’s total electricity needs, he added.

He underlined that the Vietnamese Government encouraged foreign investors, especially those with competent capacity, experience and financial capacity to engage in developing renewable energy, contributing to the country’s sustainable development process.

Anderson said that Việt Nam would continue to be one of the key markets of his firm. The firm was ready to discuss and coordinate with the Vietnamese Government to improve the efficiency and competitiveness of Việt Nam’s energy industry, he said, expressing his hope that Việt Nam would soon finalise PDP VIII and design a stable mechanism for renewable energy development.

The same day, Deputy PM Khái also met President of the New Development Bank (NDB) Marcos Troyjo who spoke highly of the outstanding economic development of Việt Nam over the past decades, holding that Việt Nam would be a future star in the field.

He said that the NDB hoped to cooperate with Việt Nam and provide financial support packages to the country’s economic recovery and development, adding that NDB’s activities are designed to suit the conditions and needs of each country, focusing on providing loans in the areas of clean energy, transport infrastructure, irrigation, water resource management and sanitation, sustainable urban development and economic cooperation and integration.

Deputy PM Khái said that the areas were of Việt Nam’s great demand for investment. Việt Nam had much experience in participating in multilateral financial institutions, he said, adding that it had shared, long-standing and close bilateral relations with the current member countries of the NDB. He held that this would be a foundation for Việt Nam to further expand cooperation with the international community, including the NDB, in the future when favourable and appropriate conditions allow. — VNS