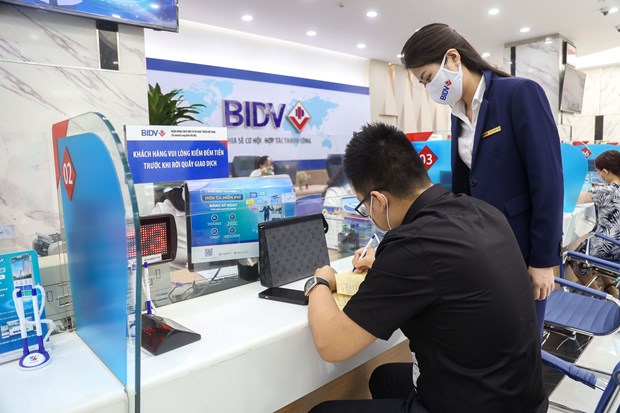 A BIDV employee helping a customer to fill in paperwork. The bank shares plunged 3.33 per cent yesterday, leading the bearish trend. Photo vietnamplus.vn

HÀ NỘI — The market ended lower on Monday, as strong selling force weighed on pillar stocks across all sectors, with VN Index falling closer to the 1,200-point level.

The VN-Index on the Hồ Chí Minh Stock Exchange (HoSE) plunged by 21.9 points, or 1.77 per cent, to 1,218.18 points. The benchmark index grew nearly 5 per cent last week as risk appetite improved, its first weekly gain in seven weeks.

The market’s breadth was in the negative zone with 358 stocks out of more than 500 stocks declining, of which seven stocks hit floor prices, while 91 stocks picked up. Liquidity increased over the last trading session, but remained at a low level. Accordingly, 557.1 million shares were traded on HoSE, worth over VNĐ13.32 trillion (US$575.1 million).

The index continued its last trend due to rising selling pressure in the afternoon trade, causing broader losses. The VN30-Index dropped by 27.16 points, or 2.12 per cent, to 1,255.35 points. Twenty-seven of the VN30 basket slumped, with one stock registering the biggest daily loss of 7 per cent, while one rose and two ended flat.

Banking, realty and manufacturing stocks influenced the downtrend, with BIDV (BID) leading the losses of 3.33 per cent in market capitalisation. It was followed by VPBank (VPB), Becamex (BCM), Masan Group (MSN), Vietcombank (VCB), Vietinbank (CTG) and Hòa Phát Group (HPG). The stocks edged down at least 2.4 per cent.

Analysts from Saigon – Hanoi Securities JSC said that if the market is weaker and the VN-Index can not keep the 1,200-point level, it will return to the correction wave.

The HNX-Index on the Hà Nội Stock Exchange (HNX) marked its four-session losing streak after decreasing by more than 2 per cent yesterday. Of which the northern benchmark index finished the day at 300.66 points, down 6.36 points, or 2.07 per cent.

During the trade, investors poured more than VNĐ1.7 trillion into HNX, equivalent to a trading volume of nearly 75.2 million shares.

Meanwhile, foreign investors continued to turn their backs on the market after net selling on both main exchanges with a value of VNĐ442.6 billion. Of which, they net sold VNĐ439.11 billion on the southern bourse, and VNĐ3.49 billion on HNX. VNS