Sustainability standards hold the key to the success of Vietnamese cinnamon 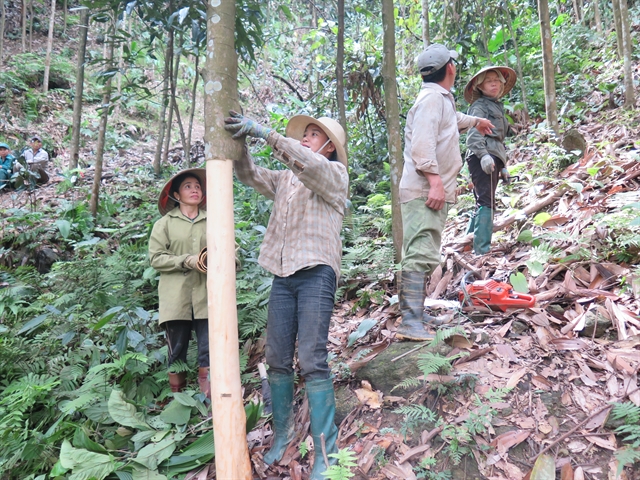 HÀ NỘI — Yên Bái aims to develop organic-certified supply chains of cinnamon in the province to keep up with the global demand for sustainable cinnamon products.

Deputy Director of the provincial Department of Agriculture and Rural Development Nguyễn Thái Bình made the remark at a seminar on Wednesday.

Bình underlined Yên Bái as a province with the largest cinnamon output in Việt Nam with a plantation of over 80,000 hectares.

However, over-exploitation in some localities has disrupted the growth of cinnamon trees, leading to a huge reduction in cinnamon quality.

The province has introduced favourable policies to support the development of organic cinnamon to keep up with global sustainability standards and certifications, ending unsustainable practices.

“Every project of over 1,000 hectares that produces organic cinnamon and integrates its products into supply chains will get the assistance of VNĐ2 billion (US$86,683),” said the deputy director.

Tạ Hạnh Liên, Representative of the Union for Ethical Biotrade (UEBT), underlined biodiversity and human well-being as the main objectives of her organisation.

“77 per cent of customers feel good when buying a product that respects biodiversity and human well-being, and 76 per cent think they have a positive impact on society by buying those products,” she said.

The representative claimed that UEBT standards are built on seven key principles, notably including biodiversity conservation and respect for the rights of actors. All UEBT members are strongly committed to those ethical principles.

Nguyễn Thị Liên, project manager from the Center for Rural Economy Development, revealed that her organisation’s biotrade project in Việt Nam, which was sponsored by the Swiss State Secretariat for Economic Affairs (SECO), has entered its second phase since September 2020 with capital of around $800,000.

The project was aimed to promote sustainable business practices with a focus on bio-diversity, expand Vietnamese firms’ global footprint through competitive enhancement and increase income for the rural population living on biodiversity resources.

“Firms assisted by the project have made a total export turnover of about $9 million by Q1 2022. The figure is expected to reach $40 million by year-end,” Liên said.

The representative also highlighted Sơn Hà and Vinasamex as two leading cinnamon firms in the province that had been UEBT-certified thanks to their strong commitments to environmental protection.

“Traces of glyphosate and chlorpyrifos residue in local cinnamon products are barring us from entering the European and American markets,” Long said.

The manager urged the authorities to introduce more favourable policies to help firms overcome those challenges, thereby gaining ground in international markets. Specifically, he suggested tighter control on pesticides and herbicides, and the substitution of organic substances in cinnamon farms.

Nguyễn Hữu Trà, Vice Chief of the Forest Ranger Office in Văn Chấn District, estimated the province’s cinnamon output at around 200,000 tonnes of bark and 75,000 tonnes of branches and leaves per year.

Sibylle Bachmann, Deputy Head of the Swiss Cooperation Office, believed that the improvement of production and sourcing and the compliance with biotrade principles would enhance sustainable livelihoods and create business opportunities. — – VnExpress News