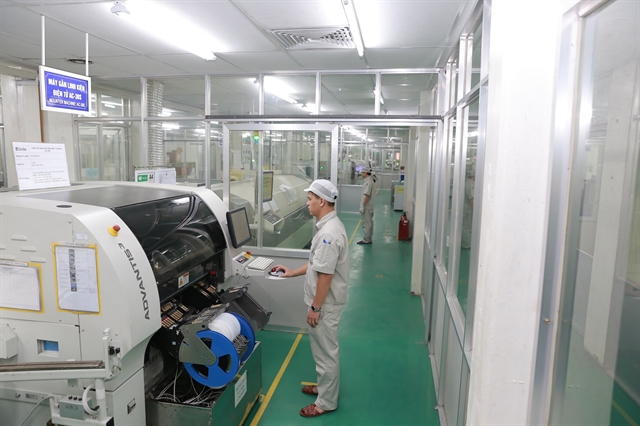 Rạng Đông Light Source and Vacuum Flask JSC has applied a digital transformation strategy and increased its revenue and profit. — Photo courtesy of the firm

Decision No 360/QĐ-TTg aims to improve the operational efficiency and competitiveness of SOEs on the basis of technology and innovation capacity, management.

The move will allow more effective mobilisation, allocation and use of social resources, while developing state capital and assets at enterprises.

Earlier, experts asked for more drastic changes as despite many efforts in restructuring and improving state-owned enterprises (SOEs), results have not been as good as expected.

Regarding the initial sale of shares, the total selling value was VNĐ22.7 trillion (US$987 million) or 23 per cent of the plan.

Director of the MoF’s Corporate Finance Department, Đặng Quyết Tiến, said that the slow progress of equitisation and divestment of state capital was due to large-scale enterprises, which owned a lot of land and the sale of state capital as well as the pandemic.

More importantly, Tiến said, SOE leaders were not determined and indecisive, which has hindered the improvement of the local SOEs, which were set to serve as a fulcrum for the economy.

Chairman of the Việt Nam International Arbitration Centre Vũ Tiến Lộc said: “There is a lack of strong enterprises to play a leading role and promote the development of small and medium-sized enterprises to develop accordingly.”

Improving the scale and efficiency of enterprises

At the request to speed up the restructuring of SOEs, the MoF has developed a draft project aiming to restructure SOEs, focusing on corporations in 2021-25.

In the earlier meeting on February 14 with the Government Standing Committee on the draft project, Politburo member and Prime Minister Phạm Minh Chính told ministries and branches to focus on perfecting institutions and policies, ensuring the state economy played a leading role and State enterprises played a core role in increasing operational efficiency.

SOE restructuring must focus on solving issues at the weak and loss-making enterprises and maintaining, consolidating and developing efficient ones with good branding.

At the same time, PM Chính ordered a simplified administrative procedure for local equitization, in which everything must be done substantively and effectively without losing brand and corporate identity.

Head of the Ministry of Planning and Investment (MPI), Nguyễn Chí Dũng, said that in 2022, the ministry would focus on implementing the draft after it is approved.

He said the MPI would consolidate and develop several large-scale and effective state-owned economic groups, planning to focus on 17 large SOEs in important and necessary industries and fields for the development of the economy such as energy, industry, finance, agriculture, telecommunications and infrastructure.

Academy of Finance economist Đinh Trọng Thịnh told local media: “It is important that when the restructuring is done, it must completely innovate the management mechanism and separate the capital ownership and the right to manage the enterprise in the SOEs so that the enterprise can promote efficiency in production and business.

Thịnh said the determination of ministries and branches was needed, adding that it was necessary to specify which industries and businesses must be restructured, divested, equitised or sold so that there would be specific plans and schedules for them. — VnExpress News