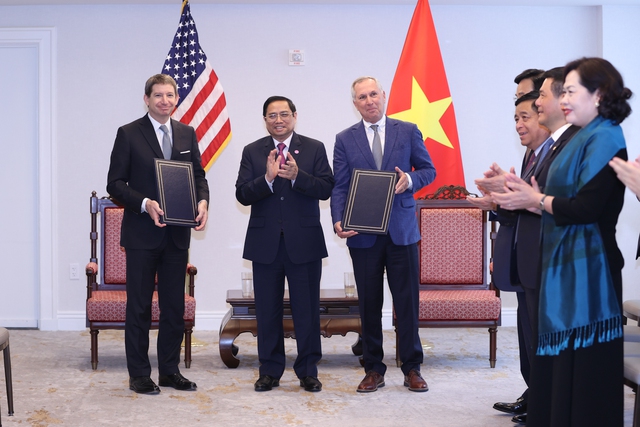 PM Chính witnessed the awarding of a certificate of DFC’s grant worth US$700 million to Fulbright University Việt Nam. — Photo courtesy of the Việt Nam Government Portal

WASHINGTON DC — Prime Minister Phạm Minh Chính met with Chief Executive Officer of the US International Development Finance Corporation (DFC) Scott A. Nathan on May 12 (US time) as part of his trip to the US.

During the talks, PM Chính suggested that, on the basis of the positive cooperation results attained in the past, DFC continue to support Việt Nam in areas such as green transition, circular economy, renewable energy, climate change response, digital transformation, addressing war legacies – including the handling of the consequences of Agent Orange and for the remains of soldiers, as well as promoting development in the new period.

The Vietnamese Government leader also proposed promoting cooperation in sustainable development of the Mekong River against the backdrop of rising sea levels, especially in improving the material and spiritual life of people in the region.

Along with advancing existing mechanisms, PM Chính proposed studying and implementing new cooperation mechanisms with countries in the region, including financial incentives in infrastructure development.

Việt Nam is a developing country that is still having to deal with the lasting consequences of the war, and it would benefit from DFC’s provisions of loans with preferential interest rates and flexible procedures – including financial incentives for small- and medium-sized enterprises.

He said the two sides should pick key projects that have a ‘spillover effect’ such as regional connectivity projects to help achieve the highest efficiency of the capitals used.

Appreciating the potentials and prospects of economic cooperation with Việt Nam, the CEO of DFC said that many cooperation projects between the two countries have been carried out very effectively and in the future, DFC looks forward to promoting cooperation in the fields of climate change response, renewable energy, development of the Mekong River region, inclusive development finance, etc.

On the occasion, PM Chính witnessed the awarding of a certificate of DFC’s grant worth US$700 million to Fulbright University in Việt Nam, saying that he highly appreciate this assistance and the two sides should closely coordinate to ensure the effective implementation of the support. — – VnExpress News 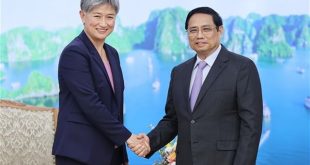