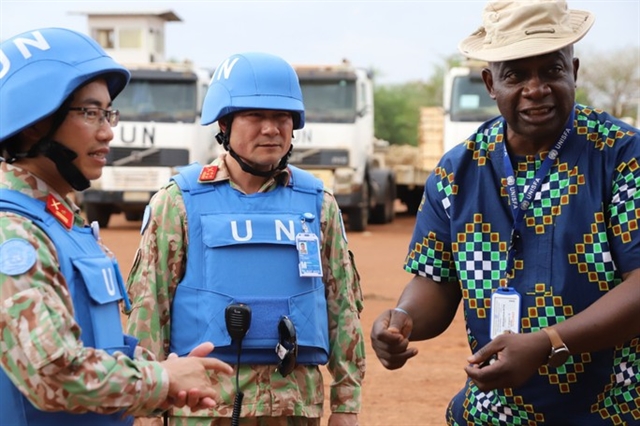 After a meeting with the UNISFA’s Engineering Section on these works, the Vietnamese engineering unit sent out two field reconnaissance teams on May 10.

The first 28 members of Việt Nam’s Engineering Unit Rotation 1 arrived at the UNISFA on May 5.

They have been assigned to take over barracks in the mission and equipment transported from Việt Nam by sea, and make preparations to welcome the official unit of 156 people, to be deployed in mid-May.

This is the first time Việt Nam has sent military engineers to join UN peacekeeping operations. It is the unit-level formation with the largest number of members ever participating in UN peacekeeping missions.

The staff members of Engineering Unit Rotation 1, which debuted on November 17, 2011, will help provide humanitarian assistance and support the UN delegations in keeping and re-establishing peace in the area.

They will also ensure transport, perform road maintenance, help reconstruct the UN base, and provide support for the local community by building community houses, schools, and other public facilities. — – VnExpress News