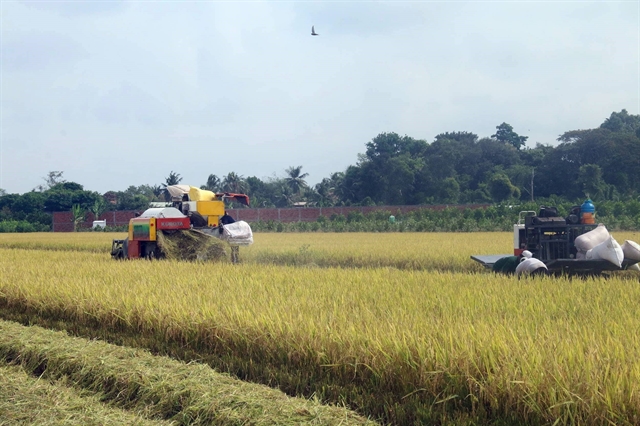 HCM CITY – The southern region has again got a bumper winter – spring rice harvest but farmers’ incomes are lower than last year because of the high costs of inputs, according to the Ministry of Agriculture and Rural Development.

The region grew nearly 1.6 million hectares of the grain rice, slightly down from last year.

Farmers are harvesting 7.2 tonnes per hectare, marginally up from last year.

But the region’s provinces and cities had been achieving bumper winter-spring crops since they forecast the possible risks early, planted the crop early and scheduled the harvests optimally, he said.

Local authorities’ guidance to farmers to grow rice varieties in demand in the market and those that grow well in their locality, and the use of advanced farming techniques were also major factors, he said.

In the winter-spring crop, fragrant and speciality varieties account for more than 80 per cent of the output.

But the cost of cropping has increased by 15 – 20 per cent this year, causing farmers’ incomes to reduce by VNĐ9 – 26 million (US$400 – 1,100) per hectare, according to local agriculture departments.

Nguyễn Văn Út, a farmer in Sóc Trăng’s Thạnh Trị District, grows one of the world’s best rice varieties, ST 24, in winter-spring under a contract with a rice company.

“If fertiliser prices had not surged, the income would be higher,” he said.

The southern region will plant a total of 1.6 million hectares in the upcoming summer – autumn crop, and estimates yields of 5.7 tonnes per hectare.

Deputy Minister of Agriculture and Rural Development Lê Quốc Doanh said the summer – autumn rice would face challenges since the COVID – 19 pandemic situation was still unpredictable and the prices of inputs were still high.

So southern provinces and cities should arrange sowing schedules suitable for each of them and increase the use of advanced farming techniques, he said.

It should prioritise key speciality varieties such as long grain white rice and fragrant rice.

The ministry has called on local authorities to speed up the harvest of the winter-spring rice and sow the summer-autumn crop early.

It wants them to arrange the sowing schedules so that they do not affect the 2022 mùa crop cultivated in the rainy season and the next autumn-winter crop. – VnExpress News