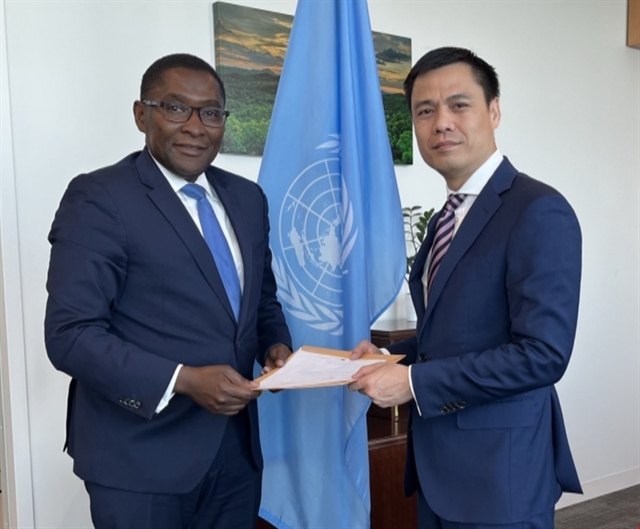 HÀ NỘI — The United Nations (UN) has affirmed its willingness to support Việt Nam in establishing a partnership on energy transition with the Group of Seven (G7) nations in a letter of UN Secretary-General Antonio Guterres to Vietnamese Prime Minister Phạm Minh Chính.

Special Adviser to the UN Secretary General on Climate Action Selwin Hart handed over the letter to Ambassador Đặng Hoàng Giang, Permanent Representative of Việt Nam to the UN at a meeting in New York on May 18.

In the letter, the UN Secretary General applauded Việt Nam’s decision to make a strong commitment to net-zero emissions by 2050 and reducing domestic coal-fired electricity consumption at the 26th United Nations Climate Change Conference of the Parties (COP26), affirming that the UN fully supports Việt Nam’s efforts to phase out coal-fired power by 2040.

Ambassador Giang thanked the UN and the Secretary General for the support for Việt Nam, saying that he would soon send the letter to PM Chính and would continue to work closely with the special adviser and UN agencies in this issue.

Earlier this week, during the visit to the US, PM Chính has asked for UN Development Programme’s help in achieving carbon neutrality commitment by 2050 in a meeting with Administrator Achim Steiner in New York.

The Government leader noted that this ambitious commitment would require 2050 which requires a huge investment to the tune of US$350-400 billion, and said UNDP should provide technical assistance to attain energy transition partnerships with G7 countries and help Việt Nam with development of strategy to mobilise climate finance from partners. — VNS