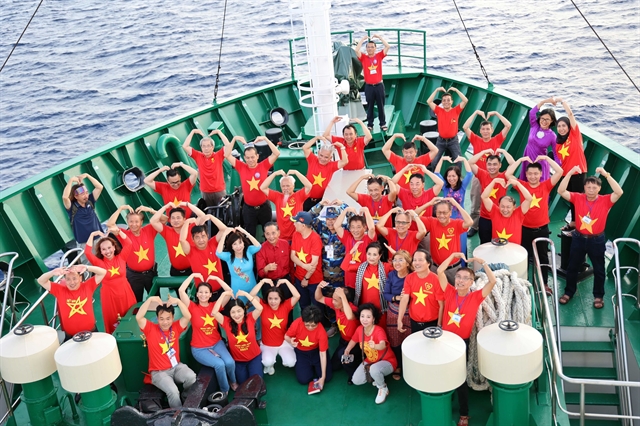 More than 40 overseas Vietnamese from 17 different countries around the world joined the trip to Trường Sa island district in the south-central province of Khánh Hòa between May 17-25. VNA/VNS Photos Diệp Trương

HÀ NỘI — Bùi Thị Thơm, an overseas Vietnamese in Germany, had been waiting for more than two years to start her voyage to the Trường Sa (Spratly) archipelago and DK1 platform in the East Sea (known internationally as the South China Sea).

Thơm was among more than 40 overseas Vietnamese from 17 countries worldwide to visit people and soldiers in Trường Sa island district in south-central Khánh Hoà Province. The visit is the 10th of its kind held by the State Committee for Overseas Vietnamese Affairs under the Ministry of Foreign Affairs and the Naval High Command.

The nine-day visit, which was delayed for two years due to COVID-19, was a valuable experience for her.

“I saw with my own eyes the lives of our soldiers and compatriots on the island and the intense vitality of the sea and islands. I felt love and took pride in the sovereignty of the islands of my country. All the people and soldiers there love the country and are determined to guard the sea and islands all day and night,” she said.

“I also met and interacted with people from overseas of many different countries. We all have the same root, and Trường Sa is a house for us to gather.”

On this trip, Thơm prepared a special gift for the officers, soldiers and people of Trường Sa Islands – a song named ‘Hà Nội with a red heart’ that she had practised before the trip.

“The song’s melody forms the words of the Vietnamese community in Germany, saying that although we are away from Việt Nam, we will always head back to the homeland. The islands and the country are always in our hearts,” Thơm said.

Sharing his pride in representing more than 450,000 Vietnamese expats in Japan to join the trip, Đinh Hùng Cường said Song Tử Tây Primary School was his first destination as soon as he arrived at Song Tử Tây (Southwest Cay) island of the Trường Sa island district.

In his eyes, the students were polite, innocent and hard-working. He believes that those who grow up on the island will develop a special love for the island and protect it better than anyone else.

“We all felt the enthusiasm in every soldier who was on duty guarding the islands. They inspired the love of the islands and the homeland of all expatriates from Africa, Europe, the US or nearby countries such as Laos, Cambodia, and Thailand,” he said. 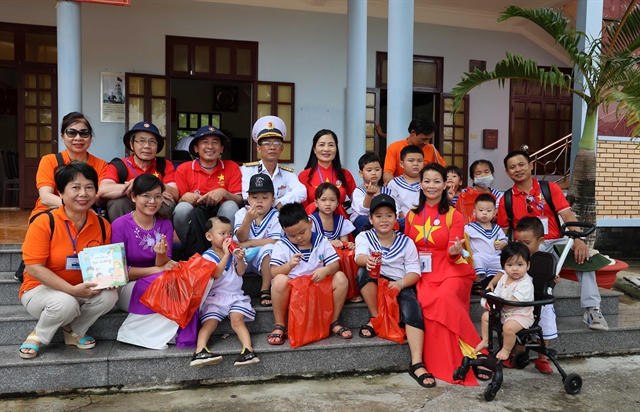 Overseas Vietnamese present gifts to children on the island.

Cao Danh, an overseas Vietnamese in Laos, expressed his respect for naval soldiers defending the islands, especially those who made sacrifices on their mission.

“Defending the sovereignty of the sea and islands is the mission of peacetime naval soldiers. That mission is glorious but equally arduous. The most beautiful image in my heart is the soldiers firmly protecting our sea and sky, fulfilling their mission,” he said.

Trần Anh Tuấn, a member of the Central Committee of Viet Nam Fatherland Front and Chairman of the Vietnamese Association in Poland, recalled his feelings on his first visit to the islands.

He and more than 30,000 Vietnamese in Poland have always been interested in the development of the country, especially the lives of people in Hoàng Sa (Paracel) and Trường Sa (Spratly) archipelagos.

Over more than 30 years away from his homeland, Tuấn has been to many countries worldwide. He read about the Trường Sa islands through books or the Internet and thought he knew a lot until he experienced the unique trip.

“I was very surprised and touched to be encouraged by the soldiers themselves. They said we could rest assured as they were always ready to obey all orders as the country needed,” he said.

“They were very young but very tough, strong, brave and determined.” 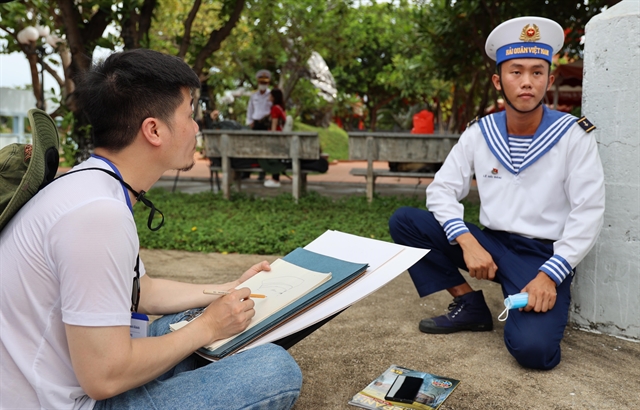 Nguyễn Văn Trinh, an overseas Vietnamese, draws a soldier’s portrait on the island.

Nguyễn Thị Hương emotionally wiped away tears when commemorating those who passed away on Gạc Ma island.

“I cried with respect for the historical value of the nation and the great sacrifices made by generations of soldiers and people defending the island. I cried because of the joy of the territorial integrity of the motherland,” Hương said.

She said they were the most beautiful and meaningful days of her life. Every morning, she went down to the kitchen on Boat 571 to join the young soldiers in preparing breakfast for all the crew members.

“They were very young, even younger than my children, but had high self-worth and good cooking skills. Their warm affection, attentive care, and enthusiasm touched us. This was an unforgettable experience,” she said.

Etcetera Nguyễn, an overseas Vietnamese who works as a journalist and painter in the US, said his first trip to Trường Sa in 2012 eliminated all his doubts and prejudice about Việt Nam.

Etcetera Nguyễn, also known as Nguyễn Quang Trường, moved to California in 1991. He lived in a community of about 1 million overseas Vietnamese in Westminster, Santa Ana, Fountain Valley, and Garden Grove.

Many came to the US after 1975 and had different political views about Việt Nam, and the news was largely negative and one-sided. Some people even refused all information about the country.

In 2004, Etcetera published Việt Weekly, a weekly publication about the country’s situation, hoping to bring balanced, accurate and updated news to his community.

Etcetera and his colleagues received protests from extremists who threatened advertisers and readers to cut off the voice of the newsroom in the early years.

In 2012, at a cultural event on the Vietnamese language, Etcetera emphasised the great concern of the overseas Vietnamese community about the sovereignty over the sea and islands and the difference in political views on the sovereignty of islands inside and outside the country.

He proposed a trip for expatriates to the islands to have the opportunity to return and witness them with their own eyes.

He was invited to the first trip to Trường Sa Archipelago a few months later.

After the visit and deep talks with soldiers on the island, the island no longer seemed distant, desolated and deserted.

“I very much respect the young, tanned soldiers and their stories. They are people with dreams, love and ideals, but they put it all aside to defend the sacred islands and islands,” he said.

“This image brings me strong confidence in young generations responsible for their homeland and the country. The trip has completely changed my perception.” 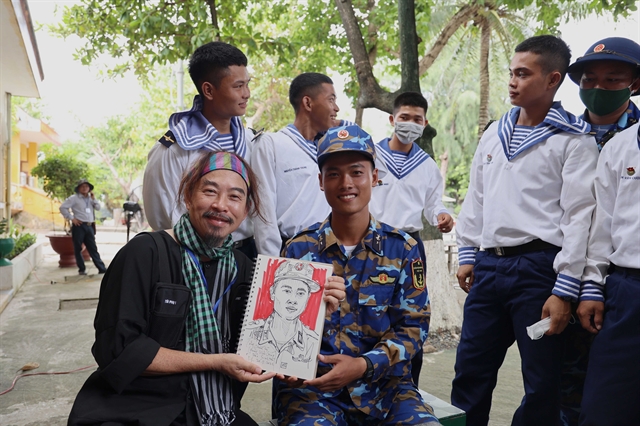 Etcetera Nguyễn, also known as Nguyễn Quang Trường, presents a portrait to a soldier on the Trường Sa (Spratly) islands.

Upon returning home to the US, Etcetera held an exhibition at his newsroom with more than 200 photos selected from the islands he visited.

“One of the most valuable things from the trip is the pride and the indisputable truth about Việt Nam’s sovereignty over the sea and islands and the warm welcome of the Government and people to overseas Vietnamese around the world,” he said.

Senior Lieutenant Colonel Lương Xuân Giáp, Political Commissar of the Navy’s Brigade 146, said during the past 10 years, the trips helped overseas Vietnamese understand more about the life of soldiers and people on the island, creating trust among Vietnamese expatriates abroad and spreading the love of the islands to the overseas Vietnamese community.

“I am always excited by welcoming overseas Vietnamese on these trips and overwhelmed by their great love for the islands. Fists of hands, happy smiles, touching stories and meaningful gifts all show their sincere love for Trường Sa and help us continue our mission on the island,” he said. — VNS