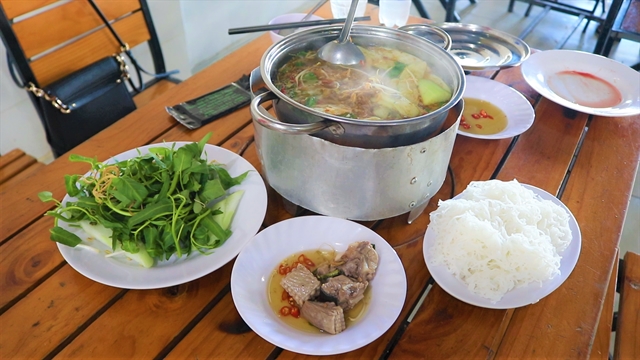 VŨNG TÀU – Stingray hotpot may sound like a somewhat bizarre fish dish, but it is actually one of the most popular seafood dishes in the coastal city of Vũng Tàu.

To prepare the dish, a fresh stingray fish is cut into small pieces, which are then cleaned thoroughly and brought out raw to diners.

Served alongside the fish is a steaming pot of broth, seasoned with pineapple slices, sour bamboo shoots, fish sauce and other spices, giving it a savoury and sour taste.

A generous heap of fresh vegetables is served as well, including water spinach and the spongy taro stems.

Diners would add the raw stingray chunks into the hotpot to cook them at their tables, before taking them out and placing them on a plate of fish sauce with chili, for the salty and spicy flavour to soak into the meat. In fact, this is a very common way to cook and enjoy any fish hotpot dishes in Việt Nam.

The fish can then be enjoyed with vegetable and rice noodles, also cooked with savoury broth.

With its flaky, soft texture and savoury flavour, it is not hard to understand why stingray hotpot is such a beloved specialty in Vũng Tàu City. The fin parts are especially tasty due to their firmer texture.

The spicy, rich broth with a sour aftertaste is also irresistible and always leaves you wanting more. It goes very well with rice noodles, making for a satisfying dining experience.

Taro stems are also noteworthy since their spongy and absorbent nature means that they easily soak up the sour and savoury broth, which is why the vegetable is often served along with hotpot at restaurants in Việt Nam.

In addition to hotpot, stingrays can be prepared in many other ways, such as stir-fried, grilled and steamed with onion. 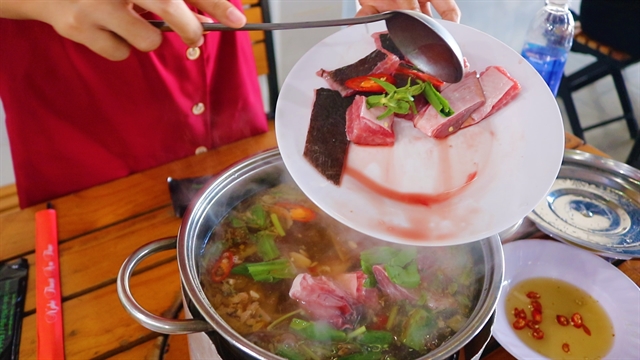 DIY: A diner adding raw stingray chunks into the boiling hotpot to cook them at their table. – VnExpress News Photo Việt Dũng

Vũng Tàu City in Bà Rịa – Vũng Tàu Province is well-known for its abundance of seafood restaurants, and one cannot travel around for more than a few minutes without seeing a restaurant selling stingray hotpot.

Many tourists are eager to try out this exotic specialty of Vũng Tàu City, and they almost always leave satisfied and wanting more.

Nguyễn Trần Thảo Nguyên, a HCM City tourist who had tried stingray hotpot for the first time, was greatly impressed by the fish’s texture and the broth’s unique sweet and sour taste, so much so that after returning to the city she immediately tried to find local restaurants that can sell the dish!

In fact, many restaurants in HCM City sell stingray hotpots to give local diners a taste of the coastal city’s specialty.

She told Việt Nam News that she spent five years running a small business in Vũng Tàu City, where she would cook seafood dishes for customers, using ingredients that they had brought to her.

“I have made many seafood dishes, and I was amazed by stingrays. It’s nutritious and can be used to make so many dishes, so I decided that I want to make a living with the fish.”

She mostly buys her fresh stingray at Vũng Tàu City, where she would clean and cut them to smaller pieces, then she would vacuum-pack and freeze the fish before bringing them to HCM City.

“When I take customer orders I would ask them when they would eat the dish so I can begin thawing the fish accordingly, and by the time customers eat them they would have been thawed naturally,” she said.

Stingray hotpot is definitely worth trying out for any customers looking for a new dining experience, especially if they happen to visit Vũng Tàu City. – VnExpress News