Phat Dat, one of the six largest property companies firms on the stock market, reported a slump in third quarter revenues to VND11 billion (US$444,000).

They were down from nearly VND1.27 trillion a year earlier and the lowest since late 2018.

In the year to date, the HCMC company’s revenues were VND1.5 trillion while pre-tax profits were VND920 billion. 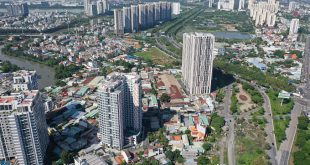