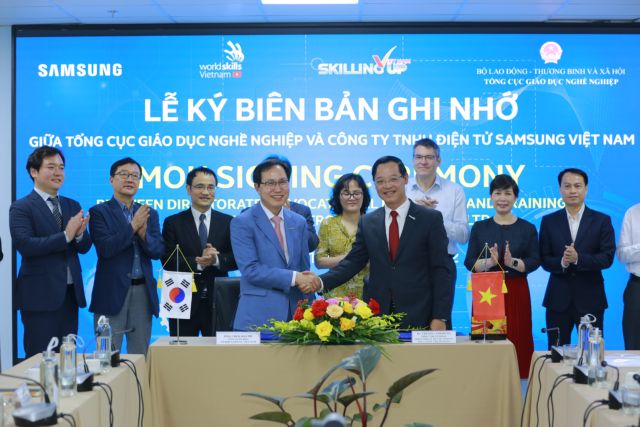 HÀ NỘI — The General Department of Vocational Training and Samsung Vietnam on Thursday signed a Memorandum of Understanding (MoU) on the supporting programme for Vietnamese contestants and experts participating in the 46th World Skills Competition to take place in Shanghai, China.

This year, Samsung will continue to support contestants and experts in two vocations, including IT Software Solutions and Computer-Aided Design (CAD).

To create conditions for match-ups for contestants, as well as encourage teams to improve skills and accumulate experiences for the competition, for the first time, the Samsung Vocational Skills Training Center will host the Online Friendly Match between competing teams with the participation of the Việt Nam’s team.

In addition, the content and format of this friendly match competition will closely follow and adhere to the regulations of the World Skills competition to bring the most realistic experiences for teams participating in this event.

They are the team that holds the Bronze Medal from the 2020 Việt Nam National Vocational Skills Competition in Electro-mechanics. It is expected that before the competition’s commencement in October, the Samsung Vocational Skills Center will continue to organise Friendly matches for other vocations.

Speaking at the ceremony, Trương Anh Dũng ­– Director of the General Department of Vocational Training, said: “Through signing this MoU, the General Department of Vocational Training will continue to closely and efficiently co-operate with Samsung Electronics Vietnam to continue the objective of achieving prizes at the 46th World Skills Competition in 2022. I have hope that this cooperation will bring favourable results, helping to strengthen the long-standing amicable relationship between the Vietnamese Government and the Korean Government.”

Choi Joo-ho, President of Samsung Vietnam, said: “The number of nourished talents in technology is the most important measure of firms’ and the nation’s competitive ability. Therefore, Samsung Vietnam is striving to train Việt Nam’s young technology talents, so they can contribute to the company’s success and step a big step forward and contribute to Việt Nam. We will proactively support the Việt Nam team so that its contestants of this year’s World Skills Competition reap the best results.”

In 2015, at the World Skills Competition organised in Brazil, contestant Nguyễn Duy Thanh of IT Software Solutions received the bronze medal. It was also the first time that the Việt Nam team achieved a medal, after participating five times.

At the 44th World Skills Competition organised in 2017 in Abu Dhabi (UAE), contestant Trần Nguyễn Bá Phước was the sole contestant of the Việt Nam delegation to receive a bronze medal for IT Software Solutions Vocation.

Aside from supporting contestants in the World Skills Competition, Samsung Vietnam also executes many projects intending to improve the quality of Vietnamese human resources, such as donating Samsung Lab study rooms and supporting education for several universities to facilitate conditions for their students to access modern IT knowledge, as well as granting Samsung talent scholarships with opportunities to intern at the Samsung Vietnam Mobile phone Research and Development Centre. — VnExpress News