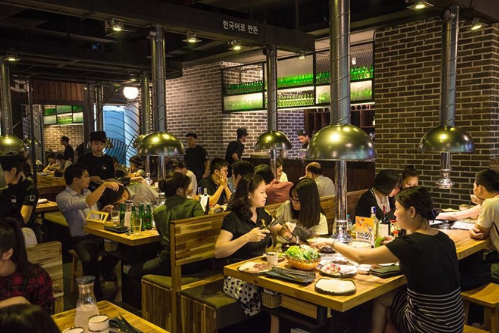 A restaurant of Golden Gate Joint Stock Company. This is one of the most important M&A deals so far this year. — Photo courtesy of the firm

HÀ NỘI — Local restaurant chain owner, Golden Gate Joint Stock Company has announced the transfer of 35.95 per cent of shares to a group of three new stakeholders from Singapore.

According to insiders, this is one of the most important M&A deals so far this year.

Prosperity Food Concepts Pte Ltd, Singapore, registered to sell more than 2.5 million shares to divest 32.9 per cent of the capital at Golden Gate while chairman of the group Trần Việt Trung will also transfer 161,781 shares or  2.12 per cent of the stake of the firm for the deal.

The deal buyers included Seletar Investments Pte Ltd (under the Singapore Government’s Temasek Holdings investment fund) which was expected to buy nearly 1.54 million common shares, the Seatown Private Capital Master Fund, which would buy 768,431 shares and Periwinkle Pte Ltd, which would buy 436,358 shares of the firm.

All transactions will be done by agreement method between March 15 and April 13.

Although the deal value has not been announced, at current valuation, investors have spent about US$234 million (about VNĐ5.2 trillion) to buy the shares.

Temasek Fund has been involved in investment activities since 2004 with investments in VNG, Scommerce, and Vinhomes. Up to now, the fund has directly invested more than $1 billion in Vietnam in many different fields.

Founded in 2005 with the first restaurant in Hà Nội, the firm owns more than 30 brands with about 400 multi-style restaurants in 40 provinces and cities, serving 18 million customers per year. Some typical restaurant chains of Golden Gate include Sumo BBQ chain, GoGi House, Vuvuzela, and Kichi Kichi.

At the end of last year, Golden Gate issued 4,937 three year bonds with par value of VNĐ100 million with an interest rate of 11.5 per cent per year. All bond buyers are domestic investors. — VnExpress News