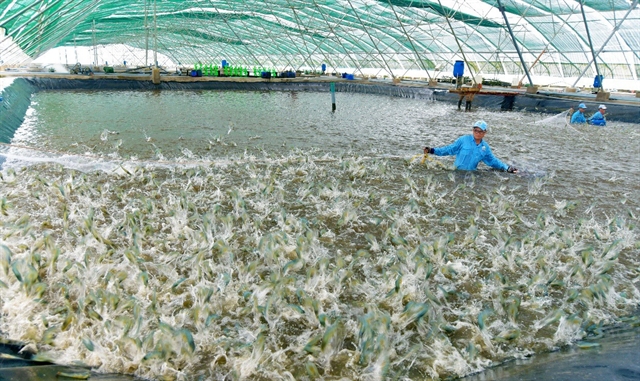 A super-intensive shrimp farm. This type of farm can boost farming profits seven to ten-fold due to higher productivity. Photo doanhnghiepkinhtexanh.vn

HÀ NỘI — Although Vietnamese shrimps are gaining ground in the international market, it’s just a matter of time before the country loses its competitive advantages due to poor farming practices, industry insiders say.

Lê Văn Quang, general director of Minh Phú Seafood Corporation is concerned that the shrimp industry has been growing to the detriment of the environment over the past 20 years.

The spontaneous proliferation of shrimp farms has led to the severe contamination of farming water in the Mekong Delta, pushing up farming overheads and making shrimps less competitive.

Notably, Việt Nam’s farming costs are 10-15 per cent higher than those of its rivals including India, Ecuador and Indonesia.

Additionally, local firms are less strict about quality management and origin tracking, and the co-operation between supply chain actors is weak, further eroding the country’s competitiveness.

“Ecuador has 250,000ha of farms but its shrimp output is comparable to that of Việt Nam which has up to 740,000ha. In 2021, the former produced 940,000 tonnes whereas the latter produced 970,000 tonnes. It is concerning that Ecuadorian shrimps are just half or one-third of the prices of Vietnamese shrimps,” Quang stressed.

The general director is also worried about India, which has outpriced Việt Nam in the international shrimp market. In 2021, India produced around 700,000 tonnes of shrimps and its shrimps were 20-30 per cent cheaper.

“If Việt Nam does not look at ways to improve its competitiveness, its shrimps will be priced out of the international market in the next five to ten years,” warned the general director.

He put down Ecuador’s price advantages to its twenty-five-year selective breeding plan, which has made its shrimps more resistant to diseases and raised the survival rate to 90 per cent.

The general director also said that the growth of shrimp farms without proper water supply and drainage systems normally goes hand in hand with the spread of water-borne shrimp diseases.

He stressed the need for a sustainable value chain and better-organised farms in Mekong Delta to make the industry more competitive and eco-friendlier.

“We should focus on integrated mangrove shrimp aquaculture, which would help rehabilitate mangrove forests and produce high-quality shrimps,” said the general director.

Quang also suggested the development of super-intensive shrimp farms in areas endowed with a good water supply and drainage systems to boost productivity.

Nguyễn Hoài Nam, deputy secretary-general of Vietnam Association of Seafood Exporters and Producers, revealed that Ecuador’s shrimps decreased its market shares in China last year, from 53 to 45 per cent.

Meanwhile, the country’s total market footprint rose to 46 per cent in both Europe and the US during the period.

“We have been keeping a close watch on India and Ecuador. Their recent market shifts have posed new competitive challenges to our shrimp,” Nam said.

The deputy secretary stressed that prices are the deciding factor in competitiveness. As the quality of breeding shrimps determines shrimp prices, it holds the key to a more competitive and sustainable shrimp industry.

“We’ve been trying to improve breeding shrimps for years. Since we are competing with Ecuador and India, prices will dictate how our shrimp exports look like in the next three to five years, or even 10 years,” Nam added.

According to experts, it is necessary to incorporate green growth, climate change adaptation, circular economy and digital transformation to the shrimp value chain to improve the industry’s competitiveness and not to lag in the global path to sustainable development.

As supply chain disruptions have led to severe labour shortages, experts also called on local authorities to grant more lands and favourable loans to shrimp firms so they could build more dormitories for workers.

In the medium- and long-term, five-year low-interest loans should be granted to firms to encourage more investments in materials areas and processing factories.