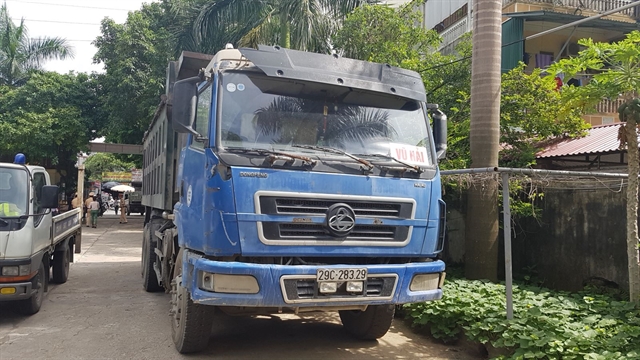 HÀ NỘI — A one-month crack-down on overloaded vehicles across the country will begin on June 15, the Ministry of Transport (MOT) has announced.

The campaign has come about after a number of overloaded vehicles with widened trunks have damaged roads in different provinces and cities.

The Directorate for Roads of Việt Nam (DRVN) said that despite many measures, such as mobile weighing stations and portable scales for inspectors, overloaded vehicles are still damaging roads and causing traffic accidents, especially on routes around cement manufacture plants and construction material ports.

Inspectors from the DRVN have continuously discovered overloaded lorries on the Highway 1A leading to the Xuân Thành and Thành Thắng cement plants in Thanh Liêm District, Hà Nam Province. Their trunks were widened by 30-50cm, or even 100cm, were full of construction materials and drove at very high speeds.

In Hà Nội, along the Highways 32, 21 and 6, inspectors found lorries with trunks extended by up to three times their original design, transporting construction materials.

Police on duty along the highways said that keeping overloaded vehicles off the road was their main duty. But, the roads leading to ports and construction sites were often quite remote, making it difficult to find all offenders.

Nguyễn Mạnh Hùng, director of the Traffic Safety Department under the DRVN, said that from April 2014 to August 2016, the MOT worked with the Ministry of Public Security to solve the problem, and overloaded vehicles reduced by 10 per cent.

However, since the campaign ended in 2017, the problem has grown in size again.

In the period 2016-21, inspectors of the transport sector checked more than 2.7 million vehicles, and more than 307,000 of them were fined a total of VNDD2.3 trillion (US$98.5 million) for weighing violations.

In this month’s campaign, the MOT asked concerned organisations to improve inspections, focus on coordination between transport inspectors and local authorities, closely check vehicles at ports, and also complete a legal framework for the issue in which applying information technology in the work.

The DRVN is responsible for checking all weighing stations and fixing broken ones. The DRVN will save images of overloaded vehicles and give warnings on the registration system.

The campaign will be conducted in northern provinces first. — VNS