He pointed to the thriving development of the Vietnam-U.S. relationship founded on mutual respect and support after nearly three decades of relation normalization.

“The relationship has borne fruits with the joint efforts of both countries in sincerity, trust, responsibility, understanding, sharing and mutual respect to achieve the goals that the two countries and the two peoples desire and aim for,” the PM said at the Center For Strategic & International Studies (CSIS) in Washington.

He said Vietnam and the U.S. have overcome their differences and laid the foundations for their relationship, as General Secretary of the Communist Party of Vietnam Nguyen Phu Trong said during his official visit to the U.S. in 2015, when he stressed the “mutual respect of each other’s political institutions, sovereignty and integrity of each other’s territory.”

The world is now at a time that could be considered most challenging after the Cold War, and the geopolitical transitions and geo-economic competition between the big countries are making breakthrough changes globally with difficult-to-predict factors that can impact the security and development of many countries, Chinh said.

There is increasing risk of war and instability, while the global economy is seeing competition and conflict, he added.

“Sincerity, trust and responsibility play major roles in dealing with the ongoing global issue,” he said. 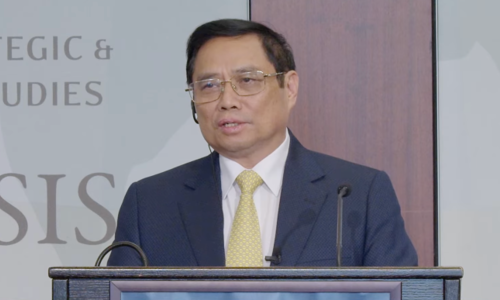 The lack of these factors is one of the reasons for tension and conflicts in many regions, which have severely impacted bilateral partnerships between countries.

Countries need to build and reinforce sincerity and trust, and each one of them needs to act responsibly, first by following their own commitments and international laws, as well as the Charter of the United Nations, in respecting independence, sovereignty and territorial integrity.

They should also respect each other’s political institutions and contribute in their own capacity to the international community.

Equal partnership and communication based on mutual respect is one of the best methods in dealing with conflicts, the PM stressed.

“Only through sincerity, trust and responsibility can countries resolve together the issues in an effective manner,” he said, adding that this main aspect should not be undermined for any reason.

The Association of Southeast Asian Nations (ASEAN) has proven the value of sincerity, trust and responsibility in dealing with regional and global matters, the PM said.

Located between the Pacific Ocean and the Indian Ocean, the bloc strives to affirm its central role in shaping the regional architecture and joins hands in building the ASEAN Community.

On the common foundation of sincerity, trust and responsibility, ASEAN is reaffirming its role and working with partners to promote a region of peace, stability, cooperation and development, based on international law and the Charter of the United Nations.

PM Chinh said the bloc has established and continues to strengthen a network of strategic partnerships with most of its important partners, including the U.S.

As an active and responsible member in ASEAN and the international community, Vietnam constantly strives to contribute to dialogue and cooperation, and stands ready to play an active role in line with its potential, Chinh said.

“From a country divided by an unreasonable war, Vietnam has bravely stood up to fight for independence, freedom and national reunification.”

And from a poor and backward country, Vietnam has worked hard to become a middle-income country and is realizing its aspirational development goals, he added.

The PM said Vietnam wants to become a developing country with modern industry and surpass the low middle-income level by 2025.

“Vietnam’s development aspiration is closely linked with the aspiration for peace, stability, cooperation and development of the whole region and the world,” he said, adding that he wished that the U.S. and its partners support Vietnam in realizing the above strategic vision, opening up great opportunities for more comprehensive and deeper cooperation between Vietnam, the U.S. and other countries.

This was Chinh’s first speech in the U.S. in the lead up to the U.S.-ASEAN Summit, which marks 45 years of ties between the two sides and 27 years since the U.S. and Vietnam established diplomatic relations.

Chinh will join other leaders of the Association of Southeast Asian Nations (ASEAN) members at the May 12-13 summit.

During this trip, he will also work with United Nations leaders in New York, talk with U.S. investors doing business in Vietnam and meet with Vietnamese expats.

CSIS is a leading academic and research institution in the U.S. It conducts policy studies and strategic analyses of political, economic and security issues throughout the world, with a specific focus on issues concerning international relations, trade, technology, finance, energy and geostrategy.

Vietnam is a critical partner for the United States and their robust relationship continues to endure through mutual respect, collaboration and a shared vision for a free and open Indo-Pacific region, the center said in a pre-event release.

Former President of Vietnam Truong Tan Sang had spoken at the CSIS in 2013, emphasizing the importance of Vietnam-U.S. relations in the Asia Pacific region.

In 2015, General Secretary of the Communist Party of Vietnam, Nguyen Phu Trong, also visited CSIS and spoke about the partnership between Vietnam and the U.S. in a new stage of development.

The former foes normalized relations in 1995.

Recent milestones in bilateral ties include the U.S. fully lifting the lethal arms export ban to Vietnam during President Barack Obama’s visit in May 2016; and sending aircraft carrier USS Carl Vinson to Da Nang in March 2018, marking the biggest U.S. military presence in the country since the Vietnam War ended in 1975.

The U.S. is Vietnam’s biggest export market and Vietnam is the U.S.’s ninth biggest trade partner.

As of March, U.S. foreign direct investment in Vietnam reached $10.3 billion, ranking 11th among 141 countries and territories that have FDI projects in Vietnam, according to the Ministry of Foreign Affairs.

US to increase rotational military presence in Australia, invite Japan

Philippines’ Jollibee in talks to sell a stake in Vietnam’s Highlands Coffee: sources