Mekong Delta farmers back away from rice as input costs rise 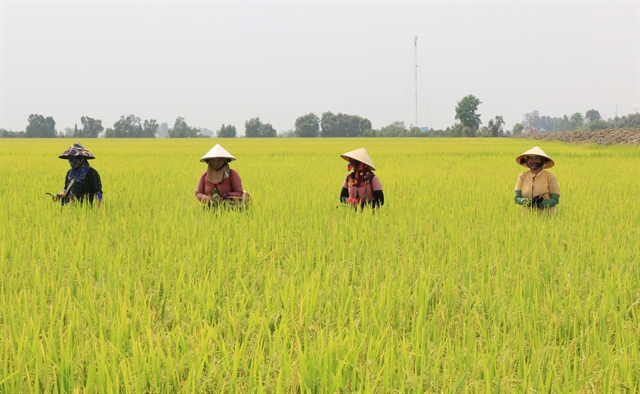 A rice field in the Mekong Delta province of Đồng Tháp’s Tháp Mười District. Many rice farmers in the delta are gradually reducing their areas for rice cultivation due to rising prices of input materials — VNA/VNS Photo Nhựt An

According to the Đồng Tháp Province’s Department of Agriculture and Rural Development, the area of rice cultivation in the province for the summer-autumn crop is 375,263ha, down 8,305ha over last year.

In An Giang Province, the area of rice seeding for the same crop was 209,186ha, down about 600ha over last year.

The province’s Plant Protection Division said farmers were switching to vegetables and fruits.

Vĩnh Long Province, meanwhile, expected to sow 51,500ha of rice for the summer-autumn crop last year, but the total sowing area was around 45,267ha, about 88 per cent of the plan.

Similarly, Trà Vinh Province plans to sow rice in more than 74,000ha for this year’s summer-autumn crop, but just 31,175ha, or 42.13 per cent of the plan had been implemented by mid-May.

The sowing for the summer-autumn rice crop happens from April until mid-June.

The selling price of the summer-autumn rice crop is often higher than for other crops, but many rice farmers have switched to vegetables and fruits that have higher value and require less irrigation than rice.

The agriculture departments in many localities have advised local farmers to change their rice cultivation techniques, apply new sowing methods and increase the use of organic fertilizers instead of chemical fertilizers.

However, many farmers say that switching to using organic production is easier said than done, given high costs and “low initial effectiveness”.

Nguyễn Trung Phương, a farmer in Tân An Luông Commune in Vĩnh Long Province’s Vũng Liêm District, said his family decided to not grow the summer-autumn rice crop because the prices of fertilizers, agricultural materials and rice seeds had increased as had other rental costs.

Input costs for rice have been increasing since the beginning of the year. The price of fertilizer is currently at VNĐ1-1.5 million (US$43-65) per bag.

His family grows three rice crops every year, but this year they’ve only grown two because input costs are too high and the selling price has become unpredictable.

Âu Trọng Hữu, an agricultural worker in Tân An Luông Commune, said the total area of the 2021-2022 winter-spring rice crop in the commune was 800ha, but this had dwindled to just 450ha for the summer-autumn crop.

“Some farmers also plan to avoid growing rice for the upcoming autumn-winter crop because production costs have increased while there has been no increase in selling prices,” he said.

“The increase in price of input materials such as fertilizers and pesticides could reduce profit by about 20 per cent over the same crop last year”, he said.

“However, the rising price of fertilizers poses a high risk of huge losses to farmers,” he said.

According to a survey commissioned by Vĩnh Long Province’s Division of Cultivation and Plant Protection, material costs account for about 71.7 per cent of the total cost of rice production and this has increased by 5.3 per cent compared to the same crop last year.

The cost of fertilizers and pesticides has accounted for 33.1 per cent and 14.6 per cent of the increase, respectively.

Nguyễn Văn Hiền, head of An Giang Province’s Division of Cultivation and Plant Protection, said the division has advised farmers to switch from chemical to organic or microbial fertilizers to improve the soil and reduce costs in the rice production.

It has also encouraged farmers to join co-operative groups or co-operatives with a focus on safe use of pesticides and growing rice in a safe and sustainable way, to ensure product quality.

To support local farmers, the province has continued to provide training and advanced techniques to farmers through agricultural extension programmes.

Meanwhile Đồng Tháp Province has instructed local farmers to apply organic rice production models, supporting them with 50 per cent of cost of organic fertilizers and ensured consumption of their products, Lê Quốc Điền, deputy director of the province’s Department of Agriculture and Rural Development, said.

The province plans to help farmers who are not growing rice to use that land for growing coriander, chili, taro and banana following European standards, he said.

Nguyễn Như Cường, head of the Ministry of Agriculture and Rural Development’s Crop Production Department, has recommended that farmers apply cost-saving rice farming methods to increase efficiency instead of leaving their land fallow.

At the end of April, the Crop Production Department issued guidance on advanced rice cultivation techniques that can reduce the cost of rice production by 15 per cent.

It has also encouraged farmers to join cooperatives which are participating in linkage chains to save costs and optimise production. — VNS