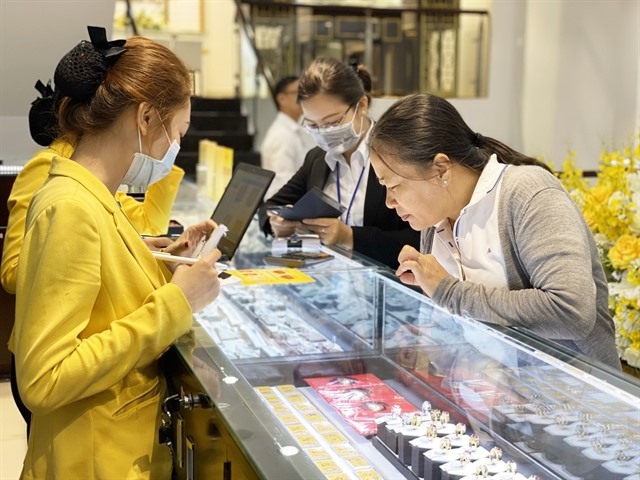 A PNJ store in HCM City. The company’s shares soared by 7 per cent yesterday. — Photo courtesy of PNJ

HÀ NỘI — Shares advanced for a fourth day this week on the Hồ Chí Minh Stock Exchange, driven by the strong growth of blue chips.

On the Hồ Chí Minh Stock Exchange, the VN-Index gained 1.33 per cent to close Friday at 1,285.45 points. The southern bourse’s index has expanded 5.4 per cent this week.

Information relating to the restructuring of the exchange-traded funds (ETFs) boosted trading in large caps.

Twenty-nine out of the top 30 largest shares by market value and liquidity (VN30) gained value while only Sacombank (STB) fell 0.7 per cent.

On Friday, the stocks in which the foreign ownership nearly touch the ceiling limit attracted investment. Phú Nhuận Jewelry JSC (PNJ) and Refrigeration Electrical Engineering Corp (REE) hit the ceiling growth of 7 per cent to VNĐ122,300 (US$5.32) for a PNJ share and VNĐ89,600 for a REE share.

By contrast, on the Hà Nội Stock Exchange, the HNX-Index decreased for a second day, down 0.68 per cent to end the trade with 311.17 points.

Liquidity improved slightly over Thursday, with 680 million shares worth nearly VNĐ7.8 trillion ($339 million) being traded on the two markets.

Net buying by foreign traders also affected the market positively. There were responsible for a total net buy value of VNĐ141 billion on the two exchanges.

According to analysts at BIDV Securities Co, VN-Index is still on the way to conquering the resistance level of 1,300 points.

“If the cash flow continues to actively support the index, in the next few sessions, it is likely that VN-Index can conquer 1,300 level,” they wrote in a daily report.

However, analysts at Viet Dragon Securities were more cautious.

After a strong explosive session, the market’s gaining momentum slowed down with profit-taking pressure from stocks that had increased strongly in the last session. The selling pressure is not really drastic, only the appearance of short-term profit-taking cash flow, they said.

“However, in general, the trading sentiment was still quite cautious when the supporting cash flow was not strong enough to help the index have a clear recovery in today’s session. We expect the VN-Index will balance at the support area around 1,260 points and regain. Therefore, investors can still expect the market’s ability to recover and wait for a higher price range to restructure the portfolio in the near future.” — VNS

Previous It’s time to promote the development of REITs: association
Next Mekong Delta farmers back away from rice as input costs rise