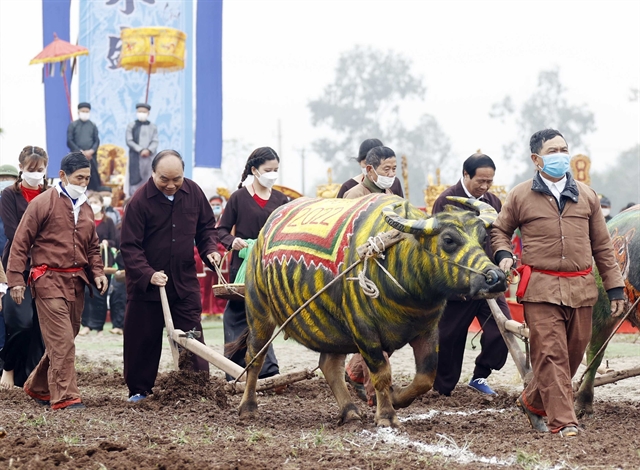 The President and local authorities offered incense to the ancestors who founded the festival.

The Tịch Điền (Ploughing) Festival ran over three days, from February 5 to 7.

The festival dates back to 987 and the Lê Dynasty, when King Lê Đại Hành decided to plough in Đọi Sơn Commune, Duy Tiên District, to encourage rice cultivation. The practice became an annual tradition held through many dynasties, before falling into oblivion under the reign of King Khải Định of the Nguyễn Dynasty. It was restored in 2009.

He said the festival had dignified the concept of taking agriculture as the foundation for national stability and social stability.

The President highlighted the important role of agriculture and rural areas in ensuring food security, creating foundations for life stability, contributing to international integration and enhancing Việt Nam’s position and prestige in the international arena, especially in the context of natural disasters and the COVID-19 pandemic.

“The Party and the State always encourage and highly appreciate the development of agriculture in the cause of building and safeguarding the country,” he said.

He urged local authorities and farmers of Hà Nam Province to switch from agricultural production to agricultural economy and mobilise all resources to invest in agricultural and rural development, especially modern irrigation systems in the Northern Delta.

They have also been told to focus on the research, application and transfer of science and technology, in the stages of value chains and smart agriculture.

The same day, President Nguyễn Xuân Phúc held a meeting and extended New Year wishes to staff of the President Office, on their first working day of the lunar new year.

He asked them to accomplish assigned tasks, including providing consultations and serving activities of the President and Vice Presidents.

Each officer must set their own goals to strive for and answer the question of what to do to complete their tasks well in the new year, he said.

He praised the team for their achievements made in 2021, and highlighted the important role of the NA and strategic breakthroughs expected to be made in 2022.

Huệ tasked the staff with supervision plans right after the holiday, saying that all decisions made by the NA on nationally important issues must put the interests of the country and people as top priority.

Deputy PM Minh wished health and happiness to the office staff and asked them to resume work immediately after the holiday. — VnExpress News