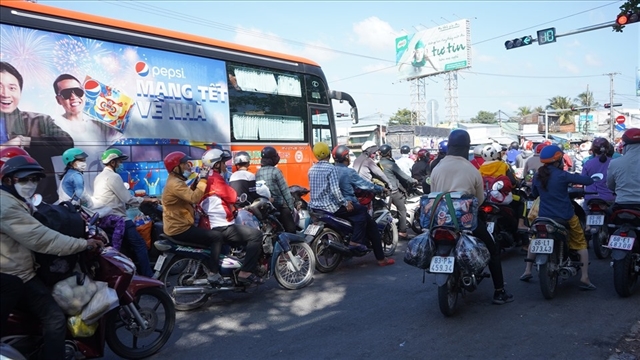 People travel from Mekong Delta provinces to HCM City on motorbikes on February 5 on National Highway No. 1. Traffic jams blocked many highways on February 5 and 6. – Photo laodong.vn

HCM CITY – Highways across southern provinces and the Mekong Delta were severely congested on February 5 and 6 as people began an exodus to HCM City and its neighbouring provinces to return to work after Tết.

A huge number of people had returned to the Mekong Delta from HCM City, Bình Dương Province and other places because of COVID-19, and there had also been the usual mass visit to hometowns before Tết.

Many travelled on motorbikes with large amounts of personal belongings.

National Highway No. 1, which traverses Cần Thơ City, Vĩnh Long City and Tiền Giang Province, was congested throughout the weekend.

A part of the highway was also flooded due to rising tides, hindering traffic further.

The toll booth at the Rạch Miễu Bridge on the highway had to temporarily close on February 6 to ensure traffic could keep flowing.

The An Thái Trung intersection between National Highways Nos. 1 and 30 in Tiền Giang Province was also heavily congested.

Trần Bá Khôi of Sóc Trăng Province was quoted as saying by Tuổi Trẻ newspaper that his family had left HCM City months before Tết.

Some highways saw traffic backing up many kilometres as people were also returning from holiday. 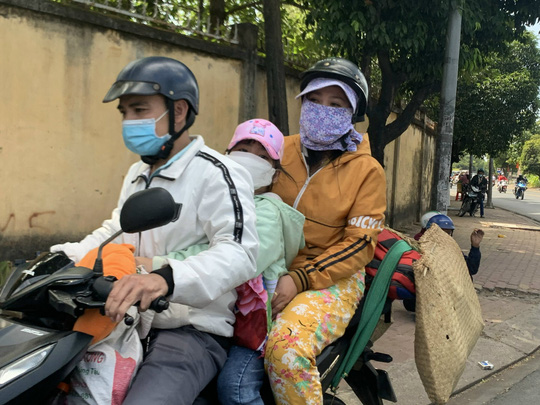 A family travels from An Giang to Bình Dương on February 6. – Photo nld.com.vn

Ferries too were mostly full, but there was still severe congestion on roads due to the massive number of vehicles.

Traffic police were on duty in many provinces to ensure safety.

The Miền Đông Bus Station (Eastern Bus Station) in HCM City saw hordes of people arriving since early morning on February 5. The number was only expected to come down after noon on February 7.

Ngọc of Nghệ An Province said her family had left HCM City and worked online.

“After Tết HCM City’s pandemic situation is under control, and my company has announced we can return to work now, which makes me very happy. I quickly bought tickets for my family to return to the city.” – VnExpress News