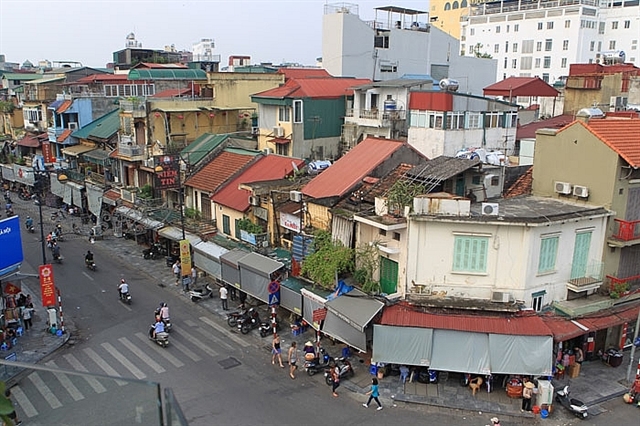 HÀ NỘI — The inner districts of Hà Nội have been actively realising the schemes of zoning inner-city historical sites after one year of being approved by Hà Nội authorities.

Among the districts, Hoàn Kiếm District has been implementing many plans and projects on urban embellishment and reconstruction to promote the special heritage value of the capital.

Old urban streets are ancient urban areas with a series of historical, cultural, and architectural projects. Key functions include workplaces, homes and centres of commerce and finance.

Chairman of People’s Committee of Hoàn Kiếm District Phạm Tuấn Long said that after more than one year of approving the historical zoning project, the district had co-ordinated with the Hà Nội Institute of Construction and Planning to design urban areas for streets of Trần Nhật Duật, Trần Quang  Khải, Trần Khánh Dư, Lý Thường Kiệt, Trần Hưng Đạo and Hai Bà Trưng as well as urban enhancement and renovating projects for old apartment buildings, and plans to preserve and promote the Old Quarter area.

In addition, the district encouraged the restoration of works according to the typical architecture of the Old Quarter, opening pedestrian streets with traditional product shops, and planting more trees in the streets, he said.

Late last year, the district completed the renovation of Bạch Mã Temple and a cultural centre on Hàng Buồm Street.

The renovation project of Vũ Đông and Hà Vỹ ancient communal houses in Hàng Hòm Street will be completed this year.

According to Long, the preservation of heritage values ​​and urban reconstruction to improve the living conditions of people in the district as per the city’s planning had certain difficulties.

The district’s land fund was small while the population density was high and the housing quality was degraded because the ancient, old houses have not been renovated and repaired.

“In particular, degraded buildings were often complicated in terms of ownership, so it was very difficult to repair and renovate,” Long said.

However, there are also many favourable factors including complete legal documents and better awareness of urban heritage conservation among the people.

“Along with the Government’s efforts, the most important thing was people’s awareness, responsibilities and contribution to protecting, preserving and promoting heritage values of the capital city,” said the district leader.

Going forward, the district will raise awareness for the community in urban heritage conservation and urban reconstruction.

“The problem was that the city authorities and relevant ministries needed to pay more attention to offering specific mechanisms and policies to solve current planning problems such as the reduction of population density in the Old Quarter area to make the historical zoning plan feasible,” Nghiêm said. — VNS