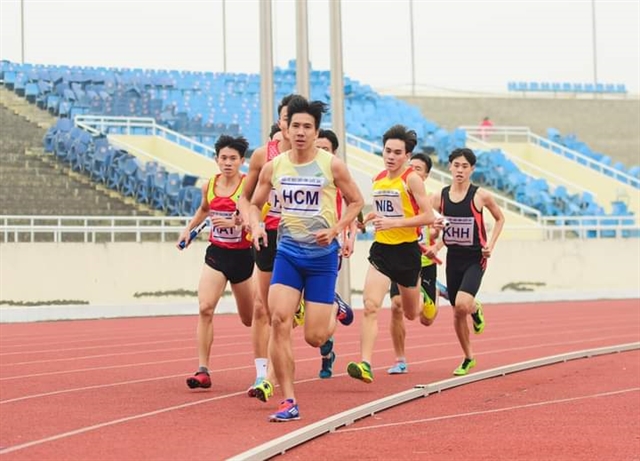 A track-an-field tournament will be held on April 25-26 as a test for referees and organisers’ operating activities at the coming SEA Games. Photo of Triệu Linh

HÀ NỘI — A pre-SEA Games athletics tournament will be held on April 25-26 as a test for the regional meet’s operation work.

The tournament will feature 120 athletes competing in 13 events including 100m, 400m, 800m, jumping, and throwing at the National Mỹ Đình Sports Complex in Hà Nội, the same venue for the SEA Games.

“The pre-SEA Games will not see foreign competitors because of the COVID-19 pandemic,” said Nguyễn Mạnh Hùng, general secretary of the Việt Nam Athletics Federation.

“The nation’s key athletes will also not take part in this event as they are in preparation for the SEA Games.

“Participants are mainly from local cities and provinces and the national youth team.”

Almost 120 referees who will officiate at the May SEA Games will work at this tournament. One day prior to the event, they will complete a training course of the Asian Athletics Association to improve their ability for the Games that is back to Việt Nam after 19 years.

The tournament will also test the electrical equipment system that will keep times and log athletes’ results. About 30 referees will be in charge of this system.

Athletics will be organised on May 14-19. Recently, equipment such as poles, hurdles, cushions, clocks, among others have been assembled to serve 47 events.

Việt Nam are currently No 1 team in the region in athletics. The team dominated two recent SEA Games, stealing the limelight from Thailand who had shadowed here for decades.

At this year’s Games, the hosts expect to win at least 16 golds to ensure the top podium.

Oanh who won three golds last Games will defend her first title in the women’s 1,500m event at 10am on May 14.

Oanh is expected not only to win but also to set up a new record in this event. At Mỹ Đình, Oanh needs to overcome a gap of about 10 seconds to be new record holder. — VnExpress News

Previous Musk gets Twitter for $44 billion, to cheers and fears of ‘free speech’ plan
Next Several industries ramp up recruitment as economy recovers