Young doctor dreams of ‘Made in Việt Nam’ pharmaceuticals 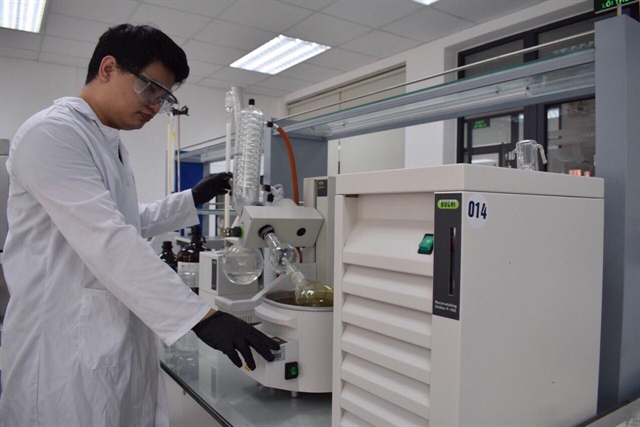 Trương Thanh Tùng researches drugs in the laboratory of the Faculty of Pharmacy, Phenikaa University, in Hà Nội. — Photo baotintuc.vn

HÀ NỘI — Trương Thanh Tùng is a young doctor with great aspirations. With experience working abroad, Tùng and his research team hope to make antiviral drugs in Việt Nam to treat infectious diseases such as COVID-19.

When still a high school student, Tùng was fascinated by creating new substances from chemical reactions. He decided to follow his dream to become a pharmacist and invent new drugs to save patients.

As a Hanoi University of Pharmacy student, Tùng had research papers published in international journals. “My recognised research work helped me believe that scientific research is my greatest strength,” said Tùng.

A mentee of Prof. Nguyễn Hải Nam, Rector of Hanoi University of Pharmacy, Tùng has had the opportunity to study and do scientific research in many countries worldwide, such as Korea, the United States and in Europe.

Although being offered many jobs abroad, Tùng chose to return to his homeland of Việt Nam to fulfill his dream of making medicines.

“Two years ago, I asked myself these questions: Am I ready to return to Việt Nam? Have I accumulated enough experience to return to my homeland and fulfill my dream? Can I research and develop pharmaceuticals in Việt Nam?” said Tùng.

“When I knew the answers were yes, I quickly returned to Việt Nam.”

When the pandemic hit, Tùng saw that this was the golden time to return to Việt Nam due to his passion for researching infectious diseases.

“In the United States and many European countries, people are interested in making medicines such as cancer treatment and management drugs,” said Tùng.

“In Việt Nam, infectious diseases and antibiotic resistance are more common. Thus, research on new antibiotics and antivirals are very much needed.”

One of the difficulties stated by Tùng in Việt Nam is that almost all drugs, including functional foods or therapeutic drugs, have to import pharmaceutical and chemical raw materials from abroad.

Such materials are not available in Việt Nam but many countries such as India, China, Korea, and the United States.

“When I returned to Việt Nam, the lab where I worked was empty,” said Tùng.

Fortunately, he received an offer to work at Phenikaa University, where Tùng and his research team at the Faculty of Pharmacy were sponsored and they have received investment in research equipment.

“After a while, I found a way to adapt myself to the conditions in Việt Nam, that is, to conduct studies according to foreign methods and flexibly utilise the equipment I have,” said Tùng.

Dương Thị Ly Hương, deputy dean of the Faculty of Pharmacy, Phenikaa University, comments: “Tùng is a person who is passionate about scientific research. Despite receiving many job offers from foreign companies, enterprises and research institutes, he still returned to Việt Nam with the desire to contribute to his home country, which I deeply respect.”

While studying and researching abroad, Tùng was a member of the editorial boards of leading international journals specialising in pharmacy. Thanks to that, he has networked with many leading professors in pharmacy, which has supported Tùng and his team immensely, especially with the free testing of new drugs that the research team found.

Tùng believes that finding drugs against infectious diseases is crucial for the community. Once an infectious disease is discovered, the number of people infected could be very high. COVID-19 is a clear example.

“If drug research for infectious diseases is successful, more people will have a better chance of being cured,” said Tùng.

Until now, Tùng’s research team have found several pharmaceutical products that can replace antibiotics. These drugs can help people with antibiotic resistance to treat diseases. They also have had some success in antiretroviral drug work tested on HIV. These studies would be modified to be applied to other viruses, including SARS-CoV-2.

On March 26, Tùng was honoured to be awarded the 2021 Young Vietnamese Face Award in scientific research. This is a result of the difficulties he overcame and motivation for him to continue with his passion.

“My team’s long-term aspiration is to produce Made in Việt Nam medicine to bring to the people drugs that are synthesised, produced and supplied in Việt Nam,” said Tùng.

“We will work together to have world-class projects so that international scientists and global pharmaceutical companies can come to Việt Nam for technology exchange. I hope our efforts can put Việt Nam on the world pharmacy map.” — VnExpress News