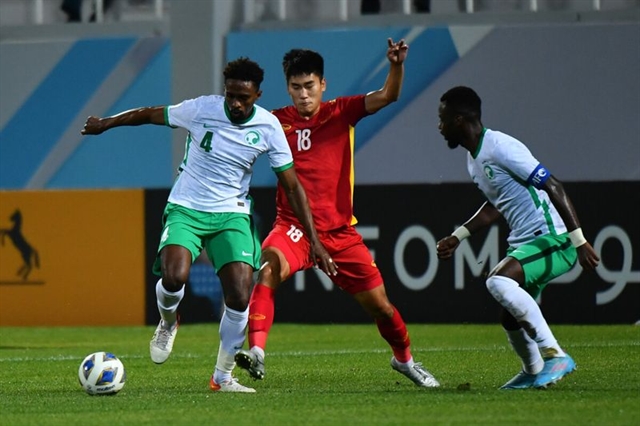 Việt Nam (red) had their fair share of chances, but could not contain Saudi Arabia’s attacking prowess and methodical playing style. — Photo AFC

HÀ NỘI — Việt Nam’s journey to AFC U23 Asian Cup glory ended on Sunday at the quarter-final stage, after a 0-2 loss to Saudi Arabia.

Gong Oh-kyun’s team surprised many by having more chances than their opponent, most notably with Lê Minh Bình’s long range effort that hit the woodwork.

A distracted Vietnamese defence gave away the opening goal to Moteb Al-Harbi just before the break, and Firas Al-Buraikan doubled The Green Falcons’ lead in the 65th minute. Việt Nam were later down to ten men after goalkeeper Quan Văn Chuẩn was shown the red card.

Coach Gong again heavily rotated the squad, replacing all five midfielders who started the match against Malaysia. In the starting line-up, six players are under the age of 21, and can participate in the next edition of the cup.

The Golden Star Warriors, like most of their matches before in this tournament, made some high pressing plays in the opening minutes of the match, searching for an early opener.

Bình had the first chance in the second minute, when Khuất Văn Khang’s cross from the left wing met him at the far post. The midfielder’s header was tame and clutched easily by keeper Nawaf Al-Aqidi.

In the 25th minute, a great pass from Vũ Tiến Long found Khang, who rebounded the ball for Nhâm Mạnh Dũng to fire from just outside the box but his effort was just wide of the post.

Khang was instrumental in Việt Nam’s play, as the midfielder participated in all their good chances in the first half. His effort in the 35th minute created space for Bình to shoot from range, but Al-Aqidi was able to get his hand to it and tipped the ball over the bar to Bình’s sheer disbelief.

Only six minutes later, a distraction caused by Al-Buraikan’s injury in Việt Nam’s box allowed fullback Al-Harbi to puncture the Vietnamese defence and shoot in at the far post for Saudi Arabia’s opening goal. Although having less shots on target, the men in white got the only goal of the first half delivering a mental blow to Việt Nam going into the break.

Việt Nam had to go all-out attack in the second half searching for the equaliser, but Saudi Arabia kept their cool and patiently waited for their chance. In the 65th minute, it was Al-Harbi again who crossed to an unmarked Al-Buraikan inside the box who made it 2-0.

The men in red could not get a shot at Al-Aqidi’s goal in the second half, as the methodical Saudis kept possession and did not allow Việt Nam to play, despite Coach Gong bringing on more attackers.

In the 78th minute, keeper Quan Văn Chuẩn, who had been Việt Nam’s hero throughout the tournament, went out of his box to clear the ball, but fouled Al-Buraikan in the process. The Japanese referee brandished a red card straight away, and although VAR intervened because Chuẩn seemed get to to the ball first, the decision was not overturned.

As Việt Nam have used up all of their substitutions, striker Nhâm Mạnh Dũng was forced to play as goalkeeper in the last ten minutes. Dũng surprisingly kept a clean sheet in the remaining part of the game and the match ended 2-0 to Saudi Arabia.

With this result, Việt Nam are out of the AFC U23 Asian Cup at the quarter-final stage, still their second-best result ever in the tournament. Saudi Arabia will face Australia on Wednesday in the semis.

Việt Nam under-23s and Coach Gong will return to action in 2023 at the 32nd SEA Games in Cambodia, as the 2022 Asian Games in Hangzhou, China was postponed to an unknown date.

Although they cannot equal 2018’s miraculous run by their senior squad, Việt Nam’s display at this tournament showed great progress and a modern, different style of play that is needed for Vietnamese football to further progress continentally.

Gong Oh-kyun’s debut as Under-23s coach also brought to light many promising youngsters such as Khuất Văn Khang, Phan Tuấn Tài and Vũ Tiến Long, in a generation that was deemed “rejects” by many pundits. — VNS