Beating more than 650 teams across 114 countries and territories, the three girls’ idea of creating biodegradable menstrual pads from dragon fruit peel won the hearts of the judges for its practicality.

“This was a very difficult choice for The Earth Prize Adjudicating Panel to make; but Team Adorbsies’ project is an idea turned into a solution that can make a genuine difference,” said Rina Kupferschmid-Rojas, chair of the judges’ panel, in a press release by the foundation.

Adorbsies is the name of Uyên, Huyền and Quỳnh Anh’s team in the competition.

Working together from Hà Nội and HCM City, the three students got the idea of producing environmental-friendly sanitary pads in the summer of 2021. Việt Nam was then in the middle of a COVID-19 surge and all production and trade activities were halted, which resulted in a large amount of unsold dragon fruit.

Quỳnh Anh told Việt Nam News: “As we are all women and care about protecting the environment, the three of us have identified a problem in Việt Nam, which is that there isn’t any kind of biodegradable menstrual pads produced in the country. But we did struggle at first to find a suitable material.

“In July last year, there were a lot of campaigns where people bought dragon fruit in bulk to support farmers. Noticing that, Uyên looked at some articles on the characteristics of the dragon fruit and realised it had potential. Then we did more research and experiments to create the product.” 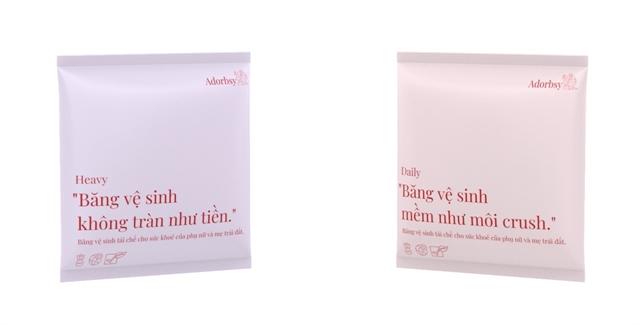 Through research, the team discovered dragon fruit peel was not only a good material but also widely available and cheap.

“The characteristics of dragon fruit peel are very suitable for producing menstrual pads, with the ability to absorb water twice as much as hemp and linen, which are the commonly used materials,” Quỳnh Anh said.

“It doesn’t absorb as much water as bamboo, but since it’s the inedible part of the dragon fruit, it’s already available and very cheap.

“It’s rarely been used before, especially not in menstrual pad production.”

As they were attending school and Quỳnh Anh lives in HCM City, collaborations between Adorbsies’ members mostly took place online.

Since there were not many studies done on dragon fruit previously, it was rather difficult for the team to get scientific information about it.

“With restrictions due to the pandemic such as not being able to go to a lab and do our own sample analysis, we had to depend on research papers found online, which was really difficult,” Quỳnh Anh said.

“We had to be very patient, we read every article and research paper on dragon fruit we could find. Sometimes we had to use a translation tool to read papers written in foreign languages. After a very long time, we finally gathered enough background information to develop the idea.” 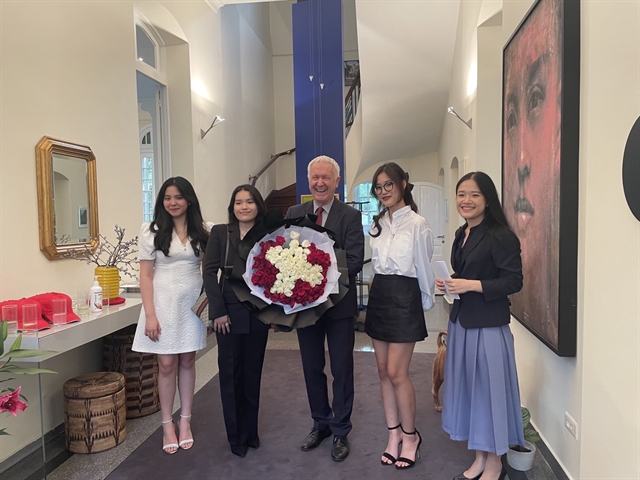 Adorbsies members meet with Ivo Sieber, Ambassador of Switzerland to Việt Nam at a press meeting about the Earth Prize in Hà Nội in late April.

Although the project is still a work in progress and Adorbsies has only just started to turn their idea into reality, they hope their product will help to change the way people think about menstruation.

“Periods and menstrual pads are still the sensitive topics that are rarely talked about in Southeast Asian countries and Việt Nam. That’s also the reason why there aren’t many alternative options to traditional hygiene products in these markets, which leave major consequences to their environments,” Quỳnh Anh said.

“Through this project, we want to not only create a product that can fill this gap but also to ‘normalise’ conversations about menstruation, which is a very normal process for women.”

She added: “We will use the money from the Earth Prize for our project and hope that our products will be available in the market in the near future, probably by the end of 2024.”

Three runner-up teams from Taiwan, South Korea and Jamaica were also rewarded with a $25,000 prize each.

Launched in September 2021, the Earth Prize is a global environmental sustainability competition for students between the ages of 13 and 19, which rewards the teams whose projects have the most potential to address environmental issues.

The Earth Foundation is a non-profit organisation based in Geneva, Switzerland, which aims to inspire, educate, mentor, and empower students and young entrepreneurs with innovative ideas to tackle environmental challenges. — – VnExpress News