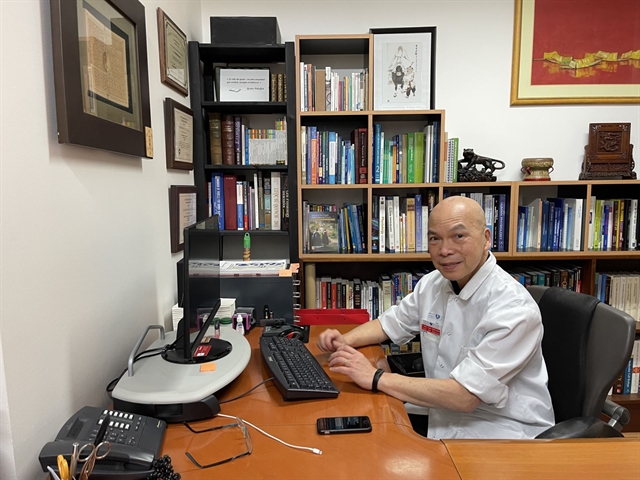 HÀ NỘI – Each person has their own way of expressing their love for their homeland. For Vietnamese-French doctor Đinh Xuân Anh Tuấn, he uses his knowledge and expertise to contribute to Việt Nam’s medicine, especially in the field of lung and respiratory diseases.

For years, he has been acting as a bridge between Việt Nam, where he was born, and France, where he lives and works.

Born in 1958 in Sài Gòn, now HCM City, Tuấn is a French researcher, doctor and university professor. He manages the hospital department of Physiology – Practical examinations at Cochin hospital in Paris. His research concerns the physiology of the respiratory system and the physiopathology of pulmonary diseases.

When Tuấn was 11 years old, he started travelling to countries such as Morocco, Tunisia and France, as his father was working as a diplomat.

Tuấn said that after passing the entrance exam to the  Lycée Louis-le-Grand, a famous high school in Paris, he studied and stayed in France.

He is passionate about algorithms and martial arts, but it was fate that brought him to work as a doctor, Tuấn said, adding that he was thankful to have a good teacher who inspired him to dedicate himself to the medical profession, even though the job was hard and had many risks.

In the 2000s, Tuấn was appointed head of the department of Physiology – Practical Examination at Cochin hospital. At the same time, he was elected a member of the French National Centre for Scientific Research. His research concerned in particular molecular and integrative physiology and the role of nitric oxide in the pathophysiology, diagnosis, and the treatment of respiratory diseases.

At the Paris Descartes University from 2002 to 2010, Tuấn managed the research unit called UPRES, which specialised in respiratory Biology, Physiology and Pathology. He also managed the University Institute of Health of the University of Corsica. His works have been published in many medical magazines and he has been the editor-in-chief of the European Respiratory Journal.

He is also a member of the editorial committee of the Magazine of Respiratory diseases – official publication of the French Society of pneumology.

Although he left his hometown early in his life, he always remembers Việt Nam, hoping to return and contribute to the homeland.

It was not until 1992 that he had the opportunity to return to his homeland, as a medical lecturer.

Since that first trip, he has travelled between Việt Nam and France more frequently. In particular, in the past ten years, he returned Việt Nam at least once or twice a year, even four times a year. Every time he returns to his hometown, he shares his knowledge with students in medical schools in Hải Phòng, HCM City, Huế and Hà Nội.

He also visited respiratory departments and specialized pulmonary hospitals to share with local colleagues his knowledge and clinical experiences.

As a coordinator in the Franco-Vietnamese Lung Association (AFVP), he participated in mobilising colleagues in France to teach medical students and exchange professional knowledge with colleagues in Việt Nam, awarding medical equipment for hospitals, and in editing and publishing specialized manuals for Vietnamese doctors to refer to.

As well as cooperating with domestic doctors, he also received and guided many Vietnamese colleagues to France for internships.

During the COVID-19 pandemic, besides his regular work, Tuấn also provides updates on the disease via official channels and his personal social network accounts.

Tuấn said that the COVID-19 pandemic was one of the most stressful times in his life as a doctor. As the number of patients increased, he became busier. The work carried him from early in the morning until late at night, making him and his colleagues exhausted.

“However, every time I see a patient, the fatigue dissipates. Again and again we rush into the fight against the COVID-19, saving patients’ lives from the hand of death,” he said.

When the pandemic in France was somewhat controlled, Việt Nam was hit heavily with the new wave of the pandemic.

Tuấn, despite living away from his home country, was absorbed in online professional exchanges, sharing, helping and encouraging domestic colleagues with affection and spirit.

He offered daily updated information and knowledge about COVID-19, short training courses and professional instruction sessions. He shared the copyright of a ventilator that he and a foreign professor invented.

Vietnamese Ambassador to France Đinh Toàn Thắng said that doctor Tuấn was a passionate and dedicated person in many ways.

“I highly appreciate him for his continuous professional efforts to become a leading doctor in the French and international medical world,” Thắng said.

“I also admire Tuấn’s unceasing contributions to developing Vietnamese medicine with Vietnamese doctors, physicians, and medical researchers,” Thắng said, adding that the embassy is proud to be accompanied by the Vietnamese experts who are dedicated to the nation’s betterment.

Recently, Tuấn has been pondering, researching and exchanging instructions to contribute to domestic efforts against the COVID-19 pandemic.

“I liked him from the first time I met him when he spoke Vietnamese with relatively difficulty. I could feel his genuine desire to bring home the best in the world in respiratory medicine, either by himself or by connecting with friends and international organisations,” Nhung said.

For professional conferences in Việt Nam, Tuấn tried to attend as many as he could, either in person or via virtual videoconference, whatever the hour in France given the time difference between the two countries, Nhung said.

Nhung said that Tuấn was also very practical with solutions on how patients could access the necessary equipment, even though resources might be limited.

Thanks to his ventilator copyright sharing, Việt Nam now can manufacture ventilators domestically for a low starting price of US$50 apiece, which is just one of the many examples of Tuấn’s initiatives, according to Nhung.

In 2019, the Việt Nam Lung Association collaborated with the French-Vietnamese Lung Association to organise a Lung Disease Scientific Conference in Cần Thơ. At that occasion, Tuấn was the representative of the French side. Participants to the conference all felt that he was like a brother who wanted to do the best for colleagues of both the French and Vietnamese side, Nhung said.

Doctor Tuấn said that he was lucky for the opportunities to study abroad and succeed in medical research.

“I wish to contribute more to Việt Nam. I always keep in my head that I’m Vietnamese,” he said. — VnExpress News