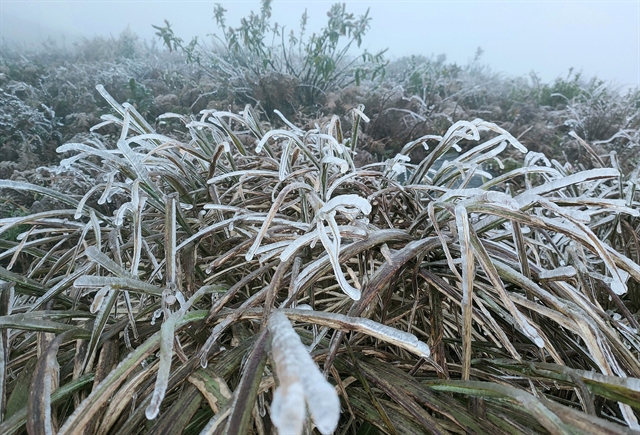 HÀ NỘI — The severe cold weather, which has caused frost and killed dozens of cattle, is forecast to continue in the northern region until Wednesday.

In some high mountainous areas, the temperatures are forecast to be below 0 degrees with frost and sleet, the centre said.

In Hà Nội, the temperatures are forecast to be 8-10 degrees Celsius.

Trần Quang Quản, a resident in the commune, said frost covered all the trees and the ground since Saturday night after the temperatures sharply dropped.

In Sơn La Province, 21 cows and buffaloes in Phù Yên District’s two communes of Suối Bau and Sập Xa died due to the severe cold weather on Sunday.

Cầm Văn Hòa, Deputy head of the district’s Department of Agriculture and Rural Development, said the district only reported damage to livestock in high mountainous communes due to the severe cold weather.

Vegetables and crops were mainly planted in the low communes so they had not been affected so far, he said.

Statistics showed that the province now has more than 1.3 million heads of cattle.

In response to the situation, the local administration has ordered relevant units to instruct local residents to actively keep warm and store enough food for their cattle during the cold snap.

Local breeders are also told to take their cattle to the barn to keep warm when the temperatures drop below 10 degrees Celsius.

Many tourists have flocked to the northern mountainous areas, where frost appeared, such as provinces of Hà Giang, Lào Cai, Lạng Sơn and Cao Bằng to go sightseeing at the weekend.

In Cao Bằng Province, frost also covered the Phia Oắc Mountain since Sunday morning while the temperature was minus 7 and 5 degrees Celsius, attracting many tourists.

In Lạng Sơn Province, a surge in tourists brought the traffic to a standstill on the road leading to Mẫu Sơn Mountain on Sunday.

The Traffic Police Department under the Ministry of Public Security recommends that local people and tourists should limit travel when the road is slippery.

In case they do travel, drivers need to be careful and drive slowly, especially when going uphill and downhill, the department said.

Drivers should also use headlights and fog lights as well as paying attention to curves and steep passes.

Keeping a safe distance from the vehicle in front is also highly recommended, the department said.