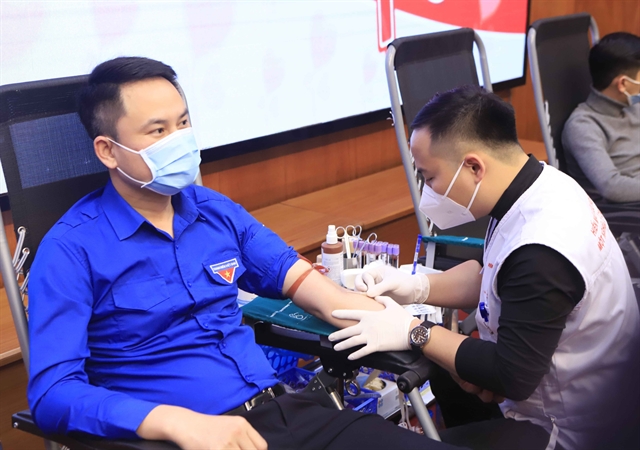 A volunteer donates blood during the festival. —VNA/VnExpress News Photo

HÀ NỘI — More than 8,600 units of blood have been collected nationwide during the 15th Xuân Hồng (Red Spring) festival.

The information was reported at the closing ceremony of the nine-day event on Sunday. The figure is higher than the set target of some 7,000 units.

Speaking at the ceremony, Dr Trần Ngọc Quế from the National Blood Centre said that the annual event was “a festival of kindness showing the benevolent spirit of volunteers and blood donors in voluntary blood donation activities.”

“The change in public awareness, the enthusiastic response of those who are willing to register to donate blood, and the companionship and efforts of volunteers of the Hanoi Youth Association for Blood Donation are among the factors to the success of the festival,” he said.

He underlined the necessity to organise similar events in 2022 to collect more blood for medical treatment and emergencies.

The Red Spring festival is one of the year’s largest annual blood donation events. It was jointly launched by the National Institute of Haematology and Blood Transfusion and the Hanoi Youth Association for Blood Donation in 2008 and conducted nationwide since 2010.

It aims to help address the shortage of blood due to the Tết (Lunar New Year) holiday. — VnExpress News