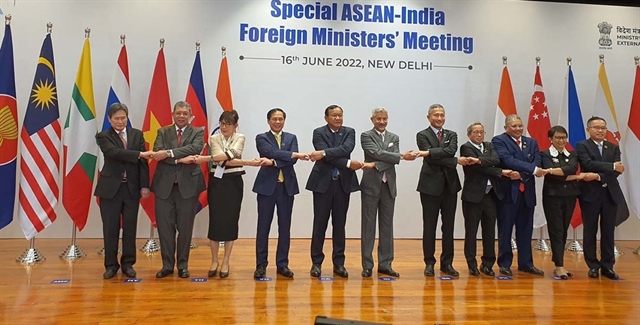 ASEAN and Indian ministers take a group photo on the sidelines of the Special ASEAN-India Foreign Ministers’ Meeting (SAIFMM) in New Delhi on Thursday. —Photo baoquocte.vn

During his speech at the event, FM Sơn highlighted the long-standing traditional relationship between India and the Southeast Asian region and the strong development of ties, saying that the two sides have recorded important achievements over the past 30 years.

He said that now is the time for ASEAN and India to elevate their strategic relationship and comprehensive cooperation to a higher level, contributing to peace, security and prosperity in the region and the world.

The Vietnamese official suggested ASEAN and India should join hands and continue to promote the common values shared by the two sides, enhance dialogue, cooperation and trust building, harmonise differences, limit disagreements, minimise conflicts, and make positive contributions to peace, stability and development in the region.

Sơn underlined the need for the two sides to strengthen support for each other in improving health capacity, coordinate to effectively implement the ASEAN-India FTA, and expand cooperation on digital transformation, innovation and sub-region development, including the Mekong-Ganga Cooperation (MGC).

He appreciated India’s support for ASEAN’s stance on the East Sea, and called on India to back ASEAN’s effort to build the East Sea into a sea of peace, stability, cooperation and environmentally friendliness, contributing to peace, security and prosperity in the region and the world as a whole.

During the meeting, Indian Minister of External Affairs S. Jaishankar affirmed that ASEAN is  an important pillar in not only the  ‘Act East’ policy, but also the overall foreign policy and the centre of the Indo-Pacific Oceans Initiative (IPOI) of India.

India supports ASEAN’s central role in the regional architecture, he said, noting that his country attaches great importance to its close relationship with ASEAN and wishes to elevate the ASEAN-India relations to a comprehensive strategic partnership.

ASEAN ministers highlighted the centuries-old traditional connection between India and Southeast Asia, which laid the foundation for ASEAN-India relations to progress over the past three decades.

The ministers agreed to work together to promote ASEAN-India relations to make effective contributions to peace, security and stability in the region.

ASEAN and India agreed to continue to prioritise recovery and improvement of health capacity; ensuring adequate supply of vaccines and medicine; strengthening sustainable maritime cooperation; responding to terrorism, transnational crime and extreme violence; promoting economic and trade exchange in order to achieve the goal of US$200 billion in bilateral trade turnover, and effectively implementing the ASEAN-India free trade agreement.

ASEAN and India affirmed their continued coordination in maintaining peace, stability, security, safety and freedom of navigation in the East Sea.

Jaishankar re-affirmed his country’s support for ASEAN’s principled stance on the East Sea, saying that India supports ASEAN in promoting dialogue and confidence-building, fully and effectively implementing the Declaration on the Conduct of Parties in the East Sea (DOC), and building an efficient and effective Code of Conduct (COC) in the East Sea that accords with international law and the 1982 United Nations Convention on the Law of the Sea (UNCLOS).

Minister Sơn held bilateral meetings with his Indonesian and Bruneian counterparts on Thursday in the framework of the SAIFMM.

During their meeting, FM Sơn and Indonesian FM Retno Marsudi discussed measures to boost bilateral ties in the post-COVID-19 period. They agreed to coordinate closely to prepare for high-level visits and the 4th conference of the Vietnam-Indonesia joint cooperation committee in 2022.

The two sides reached consensus on pushing cooperation between ministries, agencies and sectors, especially in economy-trade, so as to bring about practical benefits for people and businesses of both countries

The two sides also saw eye-to-eye on the approach to and settlement of regional and international issues on the basis of respect for international law for the common goal of peace, stability, cooperation and development.

Meanwhile, Sơn and Second Minister of Foreign Affairs of Brunei Dato Erywan Pehin Yusof agreed to work together to hold activities celebrating the 30th anniversary of the two countries’ diplomatic relationship, promote high-level visits and organize the second conference of the Vietnam-Brunei joint cooperation committee in the time ahead.

The Bruneian minister proposed that the two sides enhance cooperation in aquatic and rice production in the context of the world facing a crisis in food security. — VNS