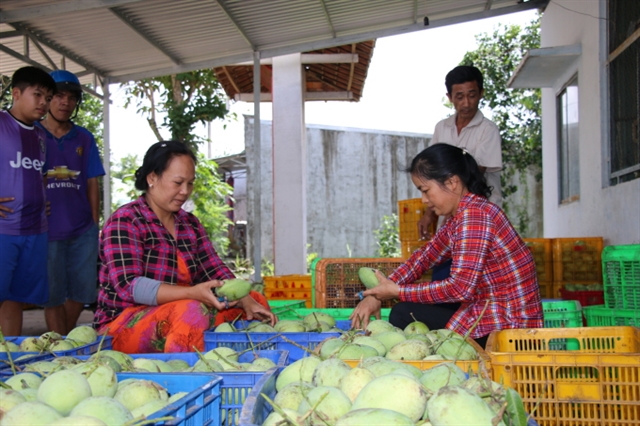 HCM CITY — Việt Nam exported more than 600,000 tonnes of mangoes worth US$310 million to 53 countries and territories last year, up by almost half from 2020.

They went to Russia, the US, South Korea, the EU, Australia, and China among others, with shipments to difficult markets like Japan tripling to 640 tonnes.

According to Nguyễn Đình Tùng, chairman of Vina T&T Group, which has been exporting mangoes since 2019, his company’s preservation technologies keep the fruit for around a month.

The free trade agreements Việt Nam has signed is helping it enter many new markets.

Mango can be grown throughout the year without much change in quality, which helps his company easily get export orders.

Việt Nam has around 87,000 hectares under mango, with the Mekong Delta accounting for nearly half.

Đồng Tháp Province in the delta has identified the fruit as a key crop in its agricultural restructuring plan.

The largest mango producer in the delta uses advanced farming techniques and processes fresh mangoes for both domestic consumption and export.

According to Phạm Thiện Nghĩa, chairman of the People’s Committee, his province had more than 12,000ha under mango, mostly in Cao Lãnh District and Cao Lãnh City.

The Hòa Lộc variety accounts for 70 per cent of its output and Cát Chu for 20 per cent, two speciality varieties that are in great demand.

Đồng Tháp plans to slightly increase its area under various fruits by 2025 with a focus on environment-friendly farming methods and developing value chains for them.

It also plans to enhance origin tracing for fruits and tourism involving orchards.

It hopes to have 928ha of fruits grown to Vietnamese good agricultural practices (VietGAP) standards and 53ha to GlobalGAP standards.

Besides mango, longan and citrus fruits are the key produce here and they are grown in large, concentrated farming areas.

Under the restructuring plan, many farmers with low-yield rice fields have switched to fruits and adopted VietGAP and GlobalGAP standards and advanced techniques to produce quality fruits for export.

Việt Nam plans to expand the total area under mango by 2030 and increase exports to $650 million to take advantage of growing global demand. — VnExpress News