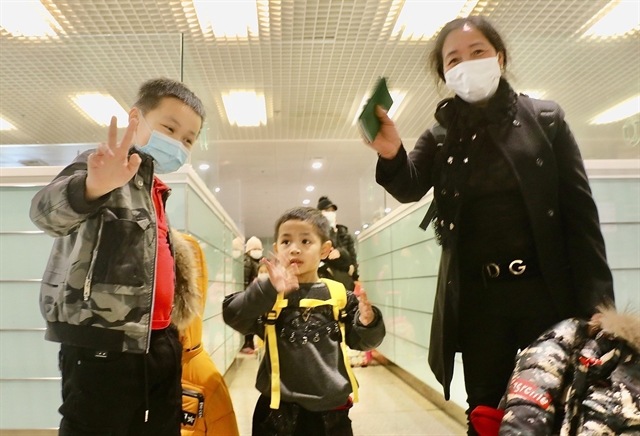 A Vietnamese family happy to be back home on Tuesday. — VNA/VnExpress News Photo Lâm Khánh

Arranged by the Vietnamese Government and conducted free of charge by the national carrier Vietnam Airlines, the flight departed Henri Coandă International Airport in Romania’s capital of Bucharest on March 7 (local time).

There were 71 children under 12 years old on board, including 14 under two years old.

Nguyễn Thị Thu Khanh, one of the passengers, said she had been on the road driving for seven straight days to get out of Ukraine to a ‘neutral’ country.

She said she was lucky to be selected for the first flight to Việt Nam.

“It was horrific, and now I’m here, I’m home, thanks everyone involved,” she said, holding back her tears.

Another Vietnamese woman living in Kharkov said the Vietnamese community as well as the local Ukrainians originally didn’t think the war could escalate to the current levels when reports of the conflict first broke out.

She said she had to leave her businesses there but fortunately still had some savings from her time working in Ukraine. 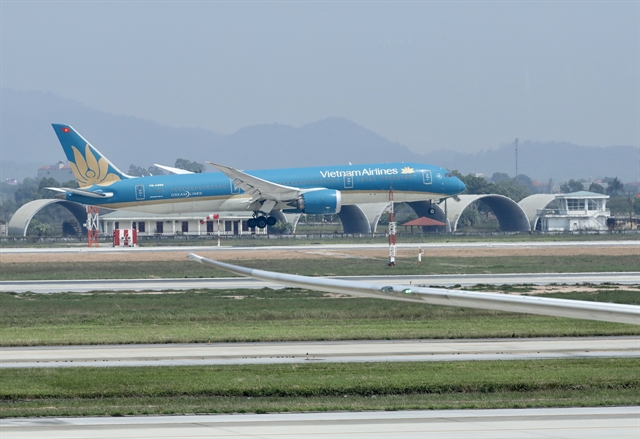 Cao Vân Anh, from Hà Nội’s Hoàn Kiếm District, was in Odessa, one of the biggest cities in Ukraine.

She said in her last days in the country, she was filled with anxiety even though this city was relatively ‘peaceful’ compared to other towns that were battle zones.

Sirens rang out two or three times during the day and everyone had to run to underground bunkers for safety.

While the adults might cope quite well, she was worried for the psychological health of her children having to experience all those noises of bombing, explosions, and sirens, so decided it was time to come back to Việt Nam for the time being.

“All I want now is no more wars and peace to return,” she told reporters.

“No one wants wars and conflicts.”

Arriving at the airport to pick up his children and grandchildren after a long and strenuous evacuation process, Phạm Quang Sơn from Thanh Xuân District in Hà Nội, said that his family was beyond ‘joyous’.

“We would like to thank the Government for taking care of overseas Vietnamese living far from home and dedicating this relief flight to bring people home,” Sơn said.

“My children and grandchildren have been working in businesses and studying in the port city of Odessa for many years now. When the war happened, everyone was extremely concerned, as bullets have no eyes, who knows what would happen.”

The Ministry of Health previously instructed that Vietnamese people repatriated on these flights did not need to be tested for COVID-19 or present vaccination or recent recovery certificates prior to boarding, but they would need to comply with preventive measures like wearing masks, disinfection, and avoiding large gatherings.

On entry all passengers except for children under two years old, were tested by health authorities or will self-test for coronavirus within the first 24 hours after entering Việt Nam. If the test results are negative, they will continue to monitor their health within 10 days from the date of arrival. If the result is positive, they must inform local health authorities immediately for further instructions. 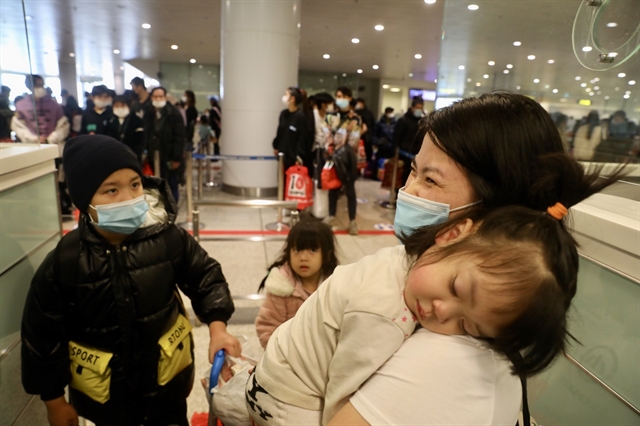 A mother with two young children from the northern province of Bắc Giang are among the 287 citizens evacuated from Ukraine. They arrived at Nội Bài International Airport, Hà Nội on Tuesday. — VNA/VnExpress News Photo

The Vietnamese Embassy in Romania has provided help for the people to travel to the airport for the flight, while working with the Romanian Foreign Ministry and airport authorities to support them with exit procedures and no incidents have occurred.

Vietnamese ambassador to Romania Đặng Trần Phong was at the airport to see off the flight.

Currently, the Foreign Ministry is actively working with relevant ministries, sectors, and agencies as well as Bamboo Airways to operate flight QH9066 on March 9 to carry 270 Vietnamese citizens from Warsaw, Poland, to Việt Nam. It is scheduled to land in Nội Bài International Airport on the morning of March 10.

Vietnamese representative agencies in Poland and Romania remain open to receive registration for seats on next flights through the form here: https://docs.google.com/forms/d/e/1FAIpQLSdQqfqeq3QTxl8CKLqbAwkQnOpHiRu8wj8hiN2lqhnqp4j-OA/viewform.

As of March 7 afternoon, more than 2,500 Vietnamese people had been evacuated from conflict-hit regions of Ukraine to neighbouring countries – 2,220 to Poland, 830 to Romania, more than 100 to Slovakia, and about 20 to Russia – where they could seek temporary shelters and travel back to Việt Nam if they want to.

According to an estimate from the Ministry of Foreign Affairs, before the war, there were nearly 7,000 Vietnamese living, working and studying in Ukraine, mostly in some big cities such as Kiev (about 800 people), Kharkov (about 3,000 people), Odessa (about 3,000 people) and some other small cities including Kherson, Donetsk, and Lviv. Not everyone wants to leave as many have stayed and made their lives in Ukraine.

Vietnamese people in Ukraine and surrounding countries who need support or want to flee from war areas or return to Vietnam can contact and place their registrations through the Ministry of Foreign Affairs or Vietnamese representative agencies through the following phone numbers: 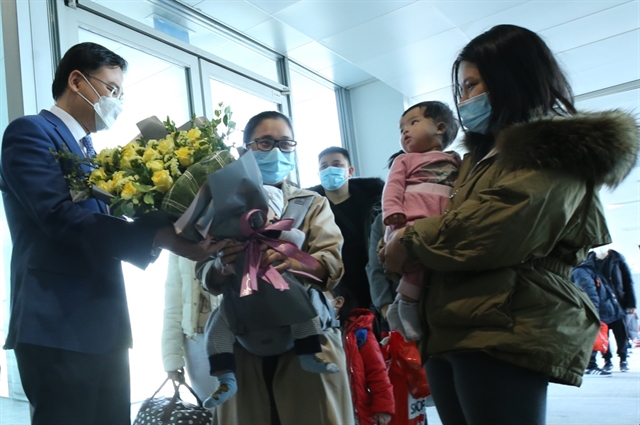