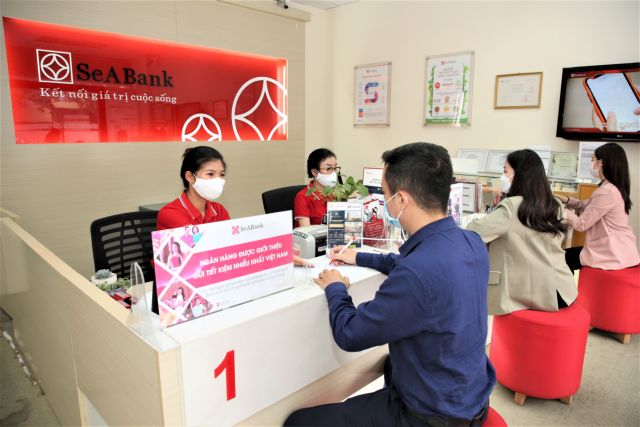 Clients conduct their banking transactions at a SeABank branch. Photo courtesy of SeABank

The bank aims to raise its deposits by VNĐ22 trillion, an increase of 16 per cent year-on-year, and its credits by VNĐ24 trillion, a rise of 17 per cent.

It will continue to keep non-performing loan (NPL) ratios below 3 per cent as well.

Its charter capital is expected to rise from VNĐ16,598 billion to VNĐ22,690 billion through equity financing, share issuance via private placement and an employee stock ownership programme (ESOP).

The bank also managed to raise its charter capital from VNĐ12,087 billion to VNĐ14,785 billion, positioning itself as one of 12 private JS commercial banks with highest caps.

It is also worth noting that SeABank was assigned B1 credit rating score by Moody’s in three consecutive year from 2019 to 2021.

It has completed the adoption of all three pilars of the Basel II banking regulations. —VnExpress News