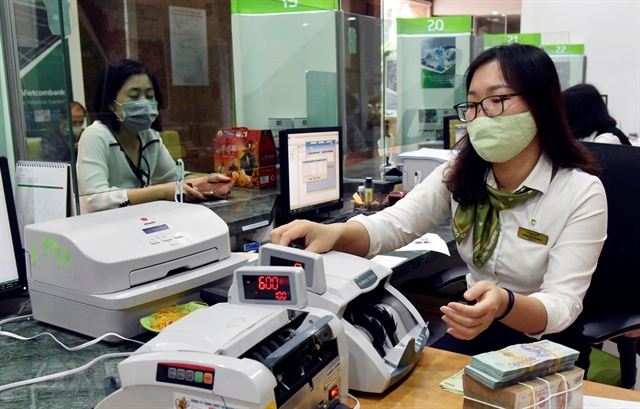 A customer makes a deposit at a Vietcombank’s office. Credit institutions expect the banking industry to gain an average deposit growth of 3.6 per cent in Q2 2022. VNA/VnExpress News Photo

HÀ NỘI — Nearly 60 per cent of credit institutions forecast their business performance results to improve in Q2 after estimating those in Q1 to be not as good as expected, the latest survey by the State Bank of Việt Nam (SBV) showed.

According to the SBV survey on business trends of credit institutions in the second quarter of 2022 released late last week, many credit institutions said that though their business performances in Q1 grew, they did not meet expectations due to the impact of the Tết (Lunar New Year) Holiday. They expect performance to be better in Q2.

Under the latest survey, credit institutions revised their expectations for profit growth in 2022 compared to the previous survey.

Accordingly, nearly 90 per cent of credit institutions forecast a positive growth in pre-tax profit in 2022 compared to 2021, down 5 percentage points from the previous survey.

Credit institutions estimated the bad debt in the banking system inched down in Q1, and they expect the indicator to continually decline in the upcoming quarters.

After estimating a 2.6 per cent rise in capital mobilisation in Q1, credit institutions expect the banking industry to gain an average deposit growth of 3.6 per cent in Q2 and 11.4 per cent for the whole year. Compared to the previous survey period, this year’s expected deposit growth decreased by 0.7 percentage points.

Credit institutions estimated the credit of the banking system rose by 5.3 per cent in Q1, much higher than the growth rate of 2.95 per cent in the same period in 2021.

They expect the indicator to increase by 4.8 per cent in Q2 and reach 14.1 per cent for the whole year, unchanged from the previous survey.

Credit institutions said the banking system’s liquidity in Q1 remained strong but was not as abundant as in Q4 2021 due to the high capital demand for payments during the Lunar New Year.

Credit institutions expect liquidity to improve in Q2 2022 and the whole year, compared to 2021.

Credit growth of credit institutions was quite positive at 5.04 per cent at the end of the first quarter of this year, much higher than the 2.16 per cent rise in the same period last year, SBV Deputy Governor Đào Minh Tú said at the Government’s regular press conference in March.

According to Tú, the surge showed the economy has positive signs and the daily life, production and business of people and firms have also returned to normal thanks to the Government’s effective measures against the pandemic.

”The increase is very high compared to previous years. At the end of the year, we will consider to adjust the credit growth to ensure it meets targets of macro-monetary policies and inflation control,” Tú said.

According to Tú, the credit growth target in 2022 that the SBV set at the beginning of this year was 14 per cent. However, the target can be adjusted up or down at the end of the year, depending on the actual situation.

However, the outbreak of the COVID-19 pandemic has negatively affected the credit quality of the credit institution system. Bad debts have been increasing since 2020 and reached more than 2 per cent by the end of November 2021. Many have warned bad debt will continue to rise again due to the pandemic’s impacts.