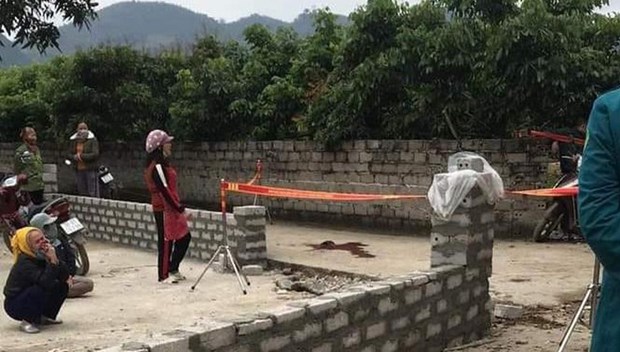 The scene of the triple shooting in Thái Nguyên Province. — Photo baophapluat.vn

THÁI NGUYÊN — Two people have died, and another seriously injured after a shooting in broad daylight outside a house in northern Việt Nam.

On Tuesday morning around 9.45am, Lê Văn Tới, 51, was shot dead in Tân Tiến Village, by a neighbour who fired from his house.

Moments later, Tới’s wife Phạm Thị Đoàn, also 51, rushed to her husband’s aid but she too was shot by the gun-wielding neighbour.

She is currently in a serious condition at Thái Nguyên Hospital.

The man who fired shots, Lê Văn Hữu, 41, then turned the gun on himself. He was pronounced dead at the scene in Dân Tiến Commune, Võ Nhai District.

Thái Nguyên police say they are looking for anyone else in relation to the shooting, and believe the neighbours had gotten into a conflict over an unpaid debt.

The whole incident was captured by a near by CCTV and the video is now widely shared on many social media pages. — VnExpress News

Previous Biden to Putin: Step back from the brink of war with Ukraine
Next Vaccinations should be deployed among children aged 5-11 as cases rise: official