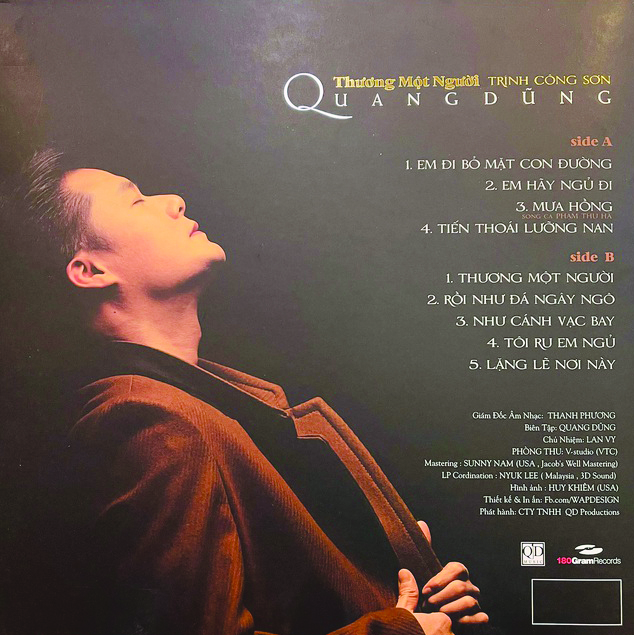 Many Vietnamese singers and bands are choosing the more difficult and expensive option of releasing their music on vinyl records, generating grater public interest in this audio channel that is making a strong comeback. Photo courtesy of Quang Dũng

HCM CITY — Việt Nam has not been an exception to the recent comeback of vinyl records, a late-1880s invention known for its rich, high-quality sound.

Many music producers and artists in the country have released vinyl records to preserve and promote this sophisticated channel among a new generation of music enthusiasts.

This is reflected in a series of vinyl products released recently. The increase in vinyl record sales marks a turning point for the music channel loved for many years by collectors in particular and music lovers in general.

Another vinyl album, “Loving one person” by singer Quang Dũng, also has songs by Sơn. The album has received positive feedback from critics and fans.

This is the third time that Quang Dũng is releasing a vinyl album, spending around three years on completing each.

“Listening to a vinyl record is a good experience. You can close your eyes and imagine that the singer is standing in front of you,” the singer said.

Quang Dũng said that making vinyl records takes more effort than CDs. “Making a vinyl record is not easy, I want to challenge myself. When I hold this record in my hand, I’m very happy with what I’ve done,” he said.

With vinyl products, singers must record in a studio with enough capacity for an entire orchestra. Therefore, this product is aimed at a picky audience that seeks perfection in listening pleasure.

Given these characteristics, the sales of vinyl records will certainly not be very high, while their production cost is very high.

Most artists say that when they produce vinyl records, they don’t care much about profit and loss, because the number of discs released is around 1,000 or 2,000. However, many singers still want to make them because they consider it a career marker.

It is not just artists from the older generation, but also young singers and bands like Cá Hồi Hoang (Wild Salmon), Trang, Hoàng Thùy Linh and Văn Mai Hương who have released their own vinyl records.

Many music lovers still love the aesthetic value and sound quality that these records bring. That it is seen as a collector’s item also increases its value and ensures its longevity.

Industry observers say that the vinyl record’s comeback is not likely to be passing trend. They are here to stay. — – VnExpress News

Previous Bảo swims his way out of poverty
Next Not lending to property sector will have mixed effects: analysts