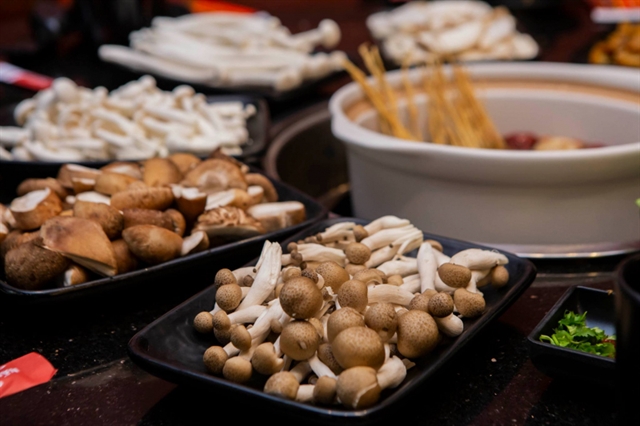 Mushroom hotpot is popular after the Tết holiday, while the weather is still cold. — Photo toplist.vn

Mushroom hotpot is a favourite this time of year, due to the cold weather and the excesses of Tết.

Trương Thị Thu Huyền, who recently returned to Việt Nam from Germany, said she missed mushroom hotpot the most. She invited her friends to her home in Hà Nội’s Quỳnh Mai Ward in Hai Bà Trưng District so they could enjoy it together.

Early one morning, Huyền and her friend Tô Thị Thủy went to Hôm Market, one of biggest markets in Hà Nội, to buy ingredients for the hotpot.

“We choose several kinds of mushroom but I like nấm kim châm (Enoki mushrooms) most. Apart from providing nutrition, supporting cardiovascular health, preventing cancer cells and boosting immune systems, it is a great dish for children and elderly because it contains high levels of protein and enhances male physiology,” said Huyền.

“I’ve eaten the mushroom in other countries but it has no special characteristics likes ours.” 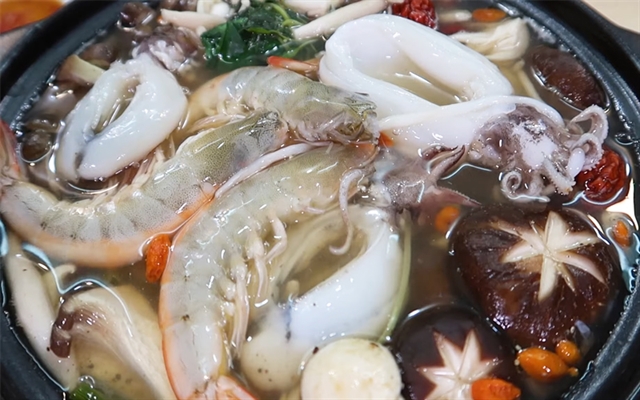 When they brought the ingredients home, Huyền’s other four friends began to cook, under guidance from Huyền’s mother Hoàng Như Lệ, who told them that they should wash the shrimp and squid carefully and use wine to release its smell.

The carrot and white radish are cut into pieces while the lingzi, king oysters and other mushrooms should be washed and soaked in cold water.

The chicken bone should be cooked for an hour over a light fire have a pure pot of broth, but the secret is that the cook should grill onions, ginger and garlic before putting them in the broth pot, said Lệ, adding that by doing so, the broth will be very tasty and delicious.

After two hours of preparations, Huyền’s group of six are ready to sit around a table to enjoy the hotpot. 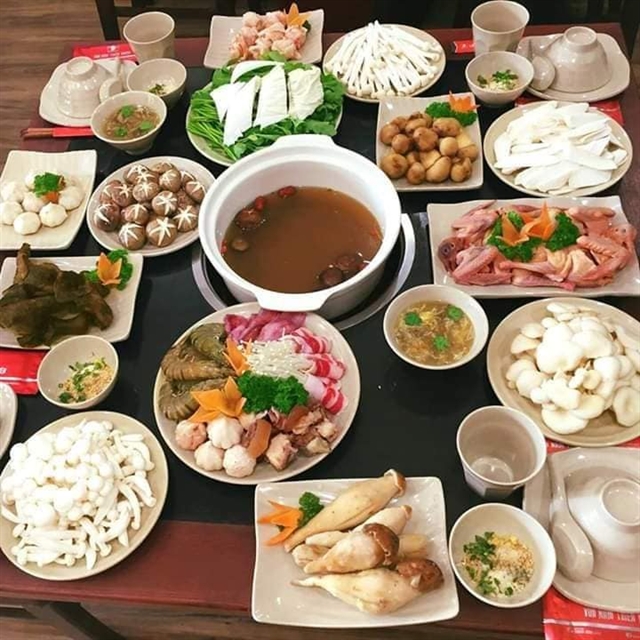 A tray of quality ingredients displayed around a hotpot. — Photo toplist.vn

Huyền asked her mother to guide them on how to eat the dish.

Lệ told them first they should boil the broth before putting shrimp, squid and mushrooms in for at least 10 minutes, to ensure that they are done to a turn. The final step is putting vegetables in for five minutes before eating.

The group said they enjoyed the dish so much for its tasty and soft mushrooms, sweet and tough seafood, and fragrant and aromatic broth.

Thủy said the hotpot gave her a warm feeling of being reunited. They comfortably spoke with each other and exchanged views, as well as challenges and difficulties they have faced during the pandemic.

“The hotpot helped us to revise childhood stories and memories, as well as talking about our future,” said Thủy, adding that she and her friends enjoy mushroom hotpot so much.

“It helps us to forget the cold food that we have to eat when we live abroad,” she added.

Professional Chef Phạm Tuấn Hải, who had been one of the judges of the Việt Nam Master Chef programme, said hotpot originally came from China thousands of years ago. Years later, it became the dish to reunite families in South East Asia such as China, Việt Nam, Thailand and Singapore. 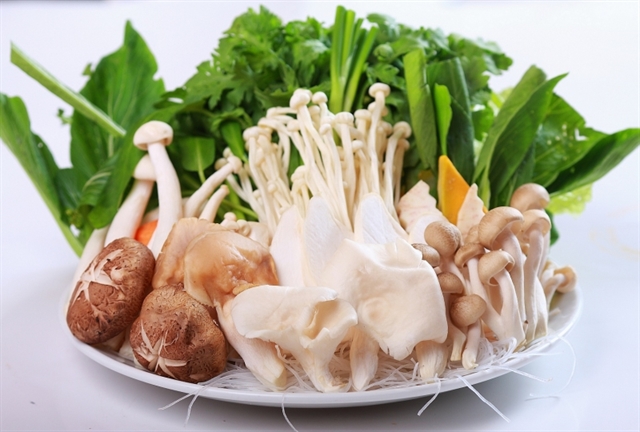 Popular mushrooms for a hopot include pineapple, king oyster and lingzi mushrooms, for their high nutrition and positive health benefits. — Photo toplist.vn

“When people wish to meet each other, they always think of a hotpot, which is often displayed with quality ingredients,” said Hải.

He said if travellers, guests and visitors do not have a chance to cook the mushroom hotpot, they should visit restaurants in Hà Nội to enjoy it. Prestigious restaurants include Quán Ăn Ngon, Ngon Garden and others in the city. — VnExpress News