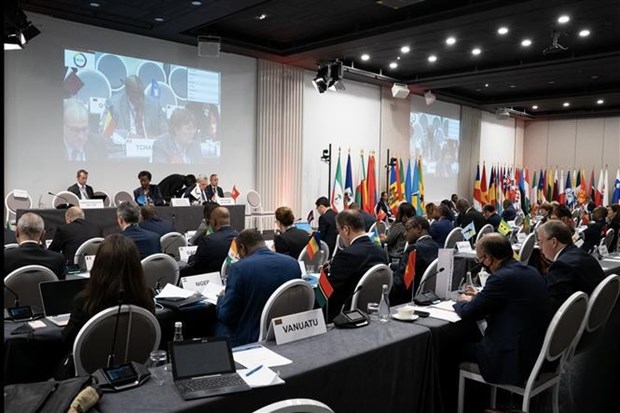 The 40th extraordinary session of the Ministerial Conference of the Francophonie. Photo OIF/VNA

The ambassador applauded the International Organisation of La Francophonie (OIF) and the Francophone community for their solidarity and firmness in the face of the challenges brought about by the COVID-19 pandemic, climate change and false information.

He stressed that economic cooperation is a high priority of the community to ensure inclusive development, growth and prosperity.

Thắng also welcomed an upcoming visit to Việt Nam by a delegation of nearly 100 businesses from Africa, Europe and North America led by OIF Secretary-General Louise Mushikiwabo, scheduled from March 21 to 26, 2022.

Briefing the conference on Việt Nam’s experience in fighting distorted information, the diplomat said the country has issued a code of conduct on social networks, consolidated its legal system, developed technical tools and workforce, reformed the communication work and established a coordination mechanism between State agencies and organisations in this regard.

The conference, the first in-person Ministerial Conference of the Francophonie since the pandemic broke out in 2020, focused on declining democracy and security in the Francophone region and the fight against distorted information.

Annadif Saleh, Special Representative of the UN Secretary-General for West Africa and the Sahel, presented a report on escalating uncertainties in Africa over the past time, as well as measures taken by the UN to stabilise the situation and promote development in the region.

For false information on social media, the delegates called for joint actions to handle the issue, stressing the role of the media and GAFA (Google, Apple, Facebook and Amazon) in the combat.

They also expressed their support for activities of the OIF and other Francophone agencies to fight fake news, such as educating youths about information verification.

The conference looked into preparations for the 18th Francophonie Summit slated for November 19-20 in Tunisia, and approved general regulations on the operation of Francophone agencies. — VnExpress News