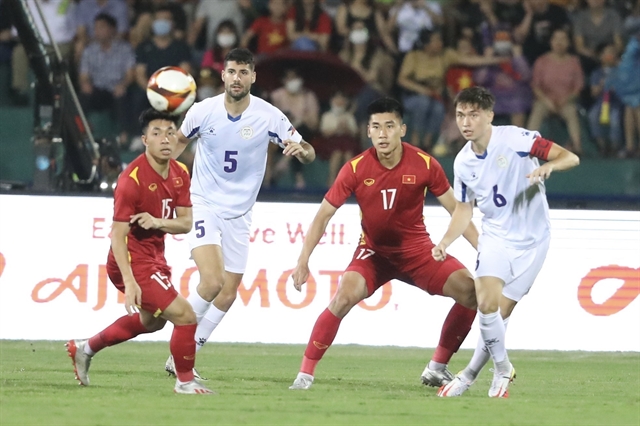 PHÚ THỌ — Việt Nam’s under-23s drew 0-0 with the Philippines at Việt Trì Stadium on Sunday in their second Group A game of the SEA Games 31 men’s football event.

Having vanquished one group rival in the form of Indonesia, the Golden Star Warriors faced another up-and-coming team in South East Asia, the Philippines. The Azkals thrashed Timor-Leste 4-0 on Friday to top the group.

Coach Park Hang-seo made three changes to the squad after the 3-0 win against Indonesia, with Vũ Tiến Long starting in place of Lê Văn Xuân. Striker Nhâm Mạnh Dũng, who was instrumental after coming off the bench in the last match, earned his place in the starting line-up as well. Huỳnh Công Đến replaced Lý Công Hoàng Anh, who was injured.

Việt Nam started the match by actively pressing forward to create chances. Công Đến got two great opportunities in the opening minutes but his shots were not accurate.

On a rainy Phú Thọ night, the men in red were all over the pitch in the first half and forced the Philippines to commit dangerous fouls to stop the attackers. Two yellow cards were brandished for The Azkals in the first half, one of which was for a foul on Tiến Linh just outside the box. Lê Văn Đô stepped up for the free-kick but his shot went centimetres wide.

Chances came to Nguyễn Hoàng Đức and Đô in the final minutes of the first half, but neither could convert before the break.

In the second half, Coach Park brought on Văn Xuân to replace Tuấn Tài on the right-wing, while Văn Đô switched to the left flank.

Việt Nam again went all-out attack. In the 51st minute, a chance came when Nguyễn Thanh Bình met Hoàng Đức’s corner with a powerful header, but it was straight at the keeper.

The Filipino defence faced multiple attacks and shots from Việt Nam in the next ten minutes, but keeper Kammeraad and his back four stayed strong. Tiến Linh was the target for most of Việt Nam’s chances on the night but the striker could not even find the target, and the match ended 0-0.

With this result, Việt Nam are still in second place in Group A, and the Philippines in first. Coach Park and his men have a lot to do in their last two matches against Timor-Leste and Myanmar if they want to secure qualification for the semi-finals. The Golden Star Warriors face Myanmar on May 13, who beat Timor-Leste 3-2 in the final minutes of extra time. — – VnExpress News