The Local Game: Not all that glitters is gold 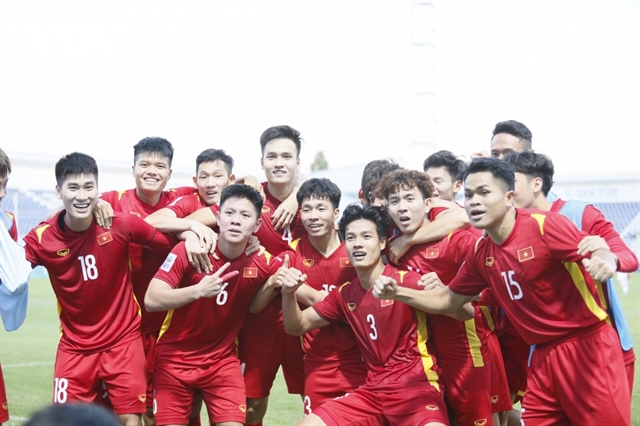 On the surface, it looks like Việt Nam are shaping up for another successful AFC U23 Asian Cup.

Coach Gong Oh-kyun’s side are undefeated with two draws, including an upset point against South Korea. A win against unfancied Malaysia on Wednesday will send them through to the knockout stages, providing there is a winner between Thailand and South Korea the same evening.

It’s Gong’s first tournament with the youngsters as coach Park Hang-seo has stepped down from coaching the underage teams at last but it seems like the success Park brought is being replicated by his fellow South Korean.

However, at the risk of being the ghost at the feast, beneath the surface of this team’s success I fear not all is well.

No, I’m not referring to the reports that if several players suffering gastrointestinal problems before playing Thailand last week, but the squad’s lack of club football experience.

It is of course normal for an underage side to be made up of a lot of players who aren’t regulars at club level, but this U23 squad has a particular paucity of playing time.

Twitter user @RabonaMike shared a table on Sunday breaking down the percentage of available V.League 1 minutes this team, the 2020 team and the famous silver medal-winning 2018 all racked up in the two (or three due to COVID) years prior to the tournament.

Both the 2018 and 2020 teams had a total of six players who appeared for at least half of the available minutes for their club sides, if one includes Lương Xuân Trường in the 2018 squad. Trường was on loan at two different South Korean sides during the period in question, so it’s fair to say he would have played regularly for parent side Hoàng Anh Gia Lai.

This 2022 side, however, can only boast three such players, one of which is goalkeeper Nguyễn Văn Toản. Perhaps worse, the 23-man squad has no less than eight players on the books of V.League 1 clubs who have appeared in less than 10 per cent of their available minutes since 2020. Both the 2018 and 2020 squads only had three such players.

Does this mean the current U23s are less talented than their predecessors? That might be the case, but the gap can’t be that big, after all holding South Korea to a draw is no mean feat, and they did just win the SEA Games gold medal.

Instead, it seems obvious that the disastrous way the V.League 1 has been organised in recent years is what’s holding them back.

As has been pointed out by plenty of others, short-termism plagues domestic football here and part of that in recent years has been related to the league’s poor response to COVID-19.

The unnecessarily truncated seasons, massive gaps between fixtures and general sacrificing of domestic football for the sake of the national team have all left clubs largely in the dark about how they should plan for the near and medium-term future, never mind the long-term.

In such a situation, it makes much more sense for coaches to give game time to experienced players rather than blooding youngsters, as all they know for sure as they need results now in whatever league format they’re stuck with, not some indeterminate future.

While I hope this year’s team can replicated the success of 2018, more playing time for the youngsters would be a much better result than any underage tournament win. — VNS