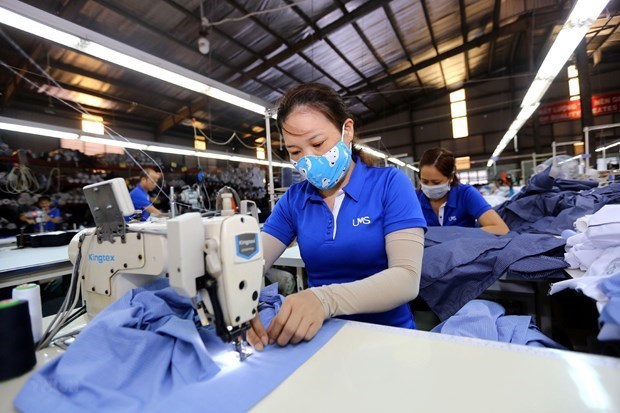 A garment and textile production line for exports.  RCEP gives Việt Nam the opportunity to increase exports to its partners. — VNA/VnExpress News Photo

According to the report, Việt Nam’s average effectively applied tariffs on intra-RCEP trade are middle of the pack at 1.2 per cent, lower than that of the Republic of Korea, at 4.8 per cent, or China, at 2.8 per cent. It noted that Việt Nam is among the ASEAN economies likely to benefit somewhat from tariff reduction, given its high trade openness.

Meanwhile, the report pointed out that trade integration between Việt Nam and the RCEP members is already high, and should grow as companies tap RCEP benefits. Việt Nam consistently imported a significant amount of goods from RCEP partners.

The report also noted that RCEP gives Việt Nam the opportunity to increase exports to its partners. In addition, the pact also brings benefits to Việt Nam in increasing foreign direct investment (FDI). It said: “Even though Singapore continues to receive the lion’s share of FDI inflows, inflows into Việt Nam have been trending higher, and have ranked among the top three recipients within ASEAN-6.”

Signed in November 2020 and taking effect on January 1, 2022, RCEP brings together 10 ASEAN member states, along with China, Japan, the Republic of Korea, Australia and New Zealand, covering 30 per cent of the global gross domestic product (GDP) worth US$26.2 trillion.

It forms a market with 2.2 billion consumers, and becomes the largest free trade area in the world in terms of population. It will eliminate tariffs on as much as 92 per cent of goods traded between its signatories eventually, expand market access for investment, harmonise rules and regulations, and strengthen the supply chains within the massive free trade zone. — VnExpress News