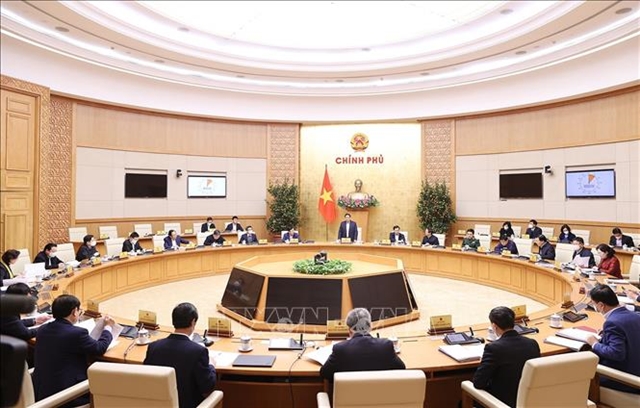 HÀ NỘI — Prime Minister Phạm Minh Chính on Wednesday chaired a Government meeting on law building – the second of its kind this year.

During the meeting, cabinet members discussed the Government’s proposal for this year’s law building programme and eight bills to be developed.

The bills are the Law on Inspection (amended), Petroleum Law (amended), Law on Civil Defence, Law on Management and Protection of National Defence Works and Military Zones, Law on Co-operatives (amended), Law on Bidding (amended) and Law on implementing democracy at the grassroots level.

Addressing the opening session, Prime Minister Phạm Minh Chính said that the Resolution of the 13th Party Congress emphasised continuing to pay attention to the work of building and perfecting institutions, making it one of the three breakthrough tasks.

He added that the economic recovery programme, worth about VNĐ350 trillion, required such problems and bottlenecks to be solved promptly so that the programme could generate positive and effective results.

The PM asked ministers and heads of agencies to pay more attention and closely direct institutional improvement, especially in reviewing current legal documents and fixing them if needed.

The Ministry of Justice was asked to inspect and oversee the law building work at agencies so that the work could be done properly in terms of procedures, time and quality. — VnExpress News