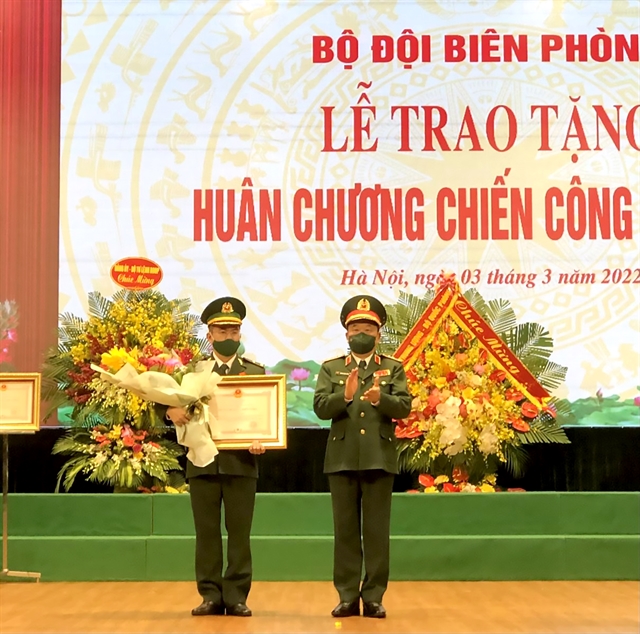 HÀ NỘI — Looking at the schedule noted in the desk calendar, Major Nguyễn Khắc Dũng knows that as a member of the Border Guard Soldiers’ Department of Drug and Crime Prevention, he has to prepare for a long investigation.

Dũng said holiday is a luxury for border guards as drug traffickers themselves rarely take a break. He and his team always have to be ready for a new mission, even during Tết (Lunar new year) festival.

Talking about the latest investigation, Dũng said while families were enjoined the Tết holiday, he and his colleagues quietly left the family on the third day of the festival to participate in Project 721 to dismantle a transnational drug ring from Laos to Điện Biên, Sơn La and Lào Cai provinces to China for consumption.

They had to prepare some food and slept in the forest to catch drug smugglers.

In this case, they arrested six people, collected 100 packages of heroin, 180,000 pills of synthetic drugs, and 1kg of methamphetamine.

In another investigation, the border forces arrested four drug smugglers, seizing 342.5kg of drugs of all kinds and 17,600 pills of synthetic drugs. Along with that, many other drug smuggling cases have been busted successfully by Dũng’s team.

In drug investigations, major Dũng is in charge of finding out information related to smugglers and locations where they operate.

After identifying suspects, the soldiers report to the department and start an investigation if approved. The soldiers work with agencies to probe how drugs are transported, set up plans, and select the right time to catch the traffickers.

The border was an area troubled by drugs and weapons trafficking rings while awareness about drugs and the law in ethnic minorities groups is still limited, causing many difficulties for border forces, said Dũng.

“As a force fights against drug crimes, it is necessary to clearly recognise the nature of each type of subject in order to find out the leader of the drug ring and also know who is being taken advantage of in smuggling cases in order to set up appropriate countermeasures and battle plans,” Dũng said.

Before working in the Department of Drug and Crime Prevention, Major Dũng was head of drug and crime prevention team of Lóng Sập border point in Sơn La Province for four years.

The time working at the hot spot of drug smuggling helped him gain a lot of experience in fighting against this dangerous crime.

“At the end of 2008 and 2009, the border force of Lóng Sập point caught ten cases of illegal drug trafficking and transportation each week,” said Dũng.

“Working in the field helped me have the ability to judge, verify subjects, and deal with them after arrest.”

Dũng said that once he and his men arrested a drug criminal who was an ethnic woman.

They were sad to see her baby when she was arrested and had to leave the baby.

Witnessing such cases, the officers and border soldiers have been more determined and made more efforts in preventing drug trafficking across the border into Việt Nam.

“Many families have been torn apart by the actions of drug traffickers. Only stopping this type of crime from the border can help us prevent many people from participating in illegal drug trafficking, minimising unfortunate consequences for families and society,” Dũng said. — – VnExpress News