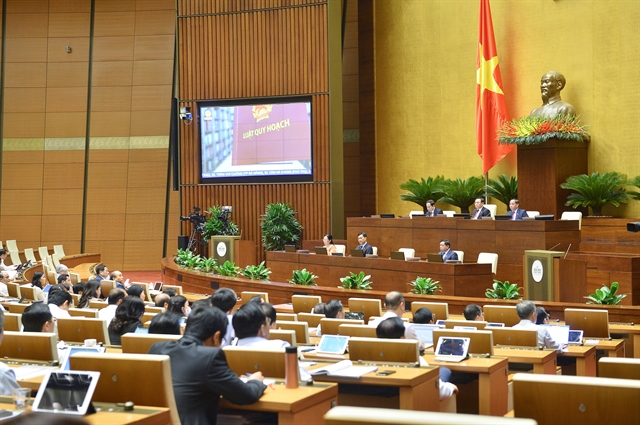 The National Assembly spent a whole working day on Monday discussing the implementation of planning law and policies. — Photo quochoi.vn

HÀ NỘI — The National Assembly on Monday discussed the implementation of planning law and policies, with opinions calling for further clarification on the responsibilities of involved parties, especially in leadership.

The move aimed to comprehensively and objectively evaluate the implementation of the Government, ministries, localities and relevant agencies since the planning law was passed in 2017.

The inspection was also expected to propose solutions to handle shortcomings and accelerate the completion of the planning in the 2021-30 period, to improve the efficiency of planning policies and laws while contributing to perfecting the planning institution.

Chairman of the NA’s Economic Committee Vũ Hồng Thanh said that the committee, which led the inspection, asked the Government, relevant ministries and branches, and the people’s committees, people’s councils and National Assembly deputies of 63 provinces and cities to report about their implementation.

Due to the complicated development of the COVID-19 pandemic, the supervisory team organised both in-person and online working sessions with 11 ministries and 14 provinces and cities.

After the Law on Planning was passed, the NA issued seven laws, the NA Standing Committee issued one ordinance, the Government issued 43 decrees while ministries and branches issued 96 guiding circulars.

The NA, Government and the Prime Minister also issued documents related to planning work. In particular, three national online conferences on planning were organised in the past few years, Thanh said.

“The supervision found shortcomings and limitations in the process of implementing policies and laws on national, regional, provincial, urban, rural, construction and land-use planning at the district level,” Thanh said.

“To remove difficulties and obstacles in planning work, the supervisory delegation proposed the National Assembly issue a resolution to supervise the implementation of policies and laws on planning so that the quality of planning work could be improved and sped up in the coming time,” he said.

Thanh proposed that the Government and agencies be allowed to skip some contents of the Planning Law and other legal documents if they faced issues that have not yet been regulated in law, or already regulated but revealed problems.

The move would help speed up the formulation and approval of planning until the planning law was revised, Thanh said.

The Government was also urged to direct ministries and agencies to expeditiously review, elaborate and promulgate regulations on technical and specialised conditions.

They are asked to continue reviewing and amending legal documents on planning that are still contradictory and overlapping to promptly solve planning issues.

Thanh said that it was also necessary to raise leaders’ responsibility, clarify individual responsibility to further ensure accountability and transparency, strengthen communications on planning policies and laws, speed up the reform of administrative procedures, organise inspections to timely and strictly handle violations relating to planning.

Deputy Thạch Phước Bình from Trà Vinh Province said that to ensure the participation of the community in planning in general and urban planning in particular, it was necessary to build synchronous capacity for all stakeholders in planning implementation, especially the management capacity of the urban government.

Clear regulations on the process of collecting public comments, and the method of organising the opinion collection must ensure that it honestly reflects the aspirations of the people, he said, emphasising that public opinions must be collected and evaluated in writing.

Deputy Lê Văn Dũng from Quảng Nam Province said that, in terms of planning quality, in recent years, urban and rural planning projects were just on paper, without practical feasibility.

He added that planning works still face many difficulties in human resources, funding and consultation works, which cause low quality in planning.

“The Government needs to urgently issue a national master plan which will be the core foundation to ensure the consistency, synchronisation and connection of the planning system throughout the country,” Dũng said. — VNS