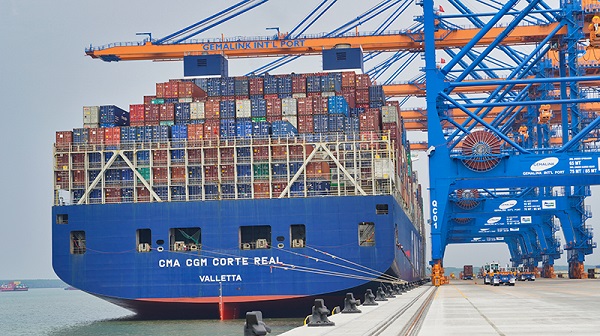 Lê Thị Mỹ Hạnh, general director of Banana Brother Farm JSC., noted that costs had increased by VNĐ3-4 million (US$131-175) per truck to transport bananas from growing regions to border gates or seaports.

Shipping lines have raised freight rates, adding a cost of at least VNĐ30 million ($1,314) to every container shipped to China.

As her firm has been in a dire situation since last year due to the pandemic, mounting transport bills are adding to its woes.

“Due to high costs, we planned to export 40 banana containers to China in February but have been able to export just 12 so far,” said the general director.

Accordingly, the firm has to decline several long-distance orders from its foreign partners because of high transport costs.

She also believes that not only firms but farmers will suffer from the blow.

“Firms are struggling to cover rising logistic costs. Given the situation, farmers’ produce will be bargained down,” she explained.

Ngô Tường Vy, deputy director of Chanh Thu Fruit Export and Import Ltd., said that her firm had never gone through such a tough time as now.

Her firm, which has not recovered from the pandemic shocks, is experiencing new issues from rising fuel prices and rising logistic costs.

She revealed that the firm had no choice but to price up its products to cover the mounting costs.

“Costs are going up, so fruit prices will be adjusted up at least 5-10 per cent accordingly. However, higher prices normally erode competitive advantages, increasing business risks,” she said.

Nguyễn Hoài Nam, deputy general secretary of Vietnam Association of Seafood Exporters and Producers, acknowledged that logistic costs were $5,000-10,000 higher than in 2020 for every container to Europe or the US.

However, higher freight rates do not necessarily mean better service.

The secretary said that some shipping lines frequently delayed shipments for 10-30 days for no reason, compounding the situation.

“Firms not only have to pay higher freight rates but also to compensate trade partners for late delivery,” he explained.

He said the rates were expected to continue to rise in March.

“The freight rates in March depend on the number of slots booked by clients. It seems that the rates are likely to go up,” said the manager.

He also underlined mounting fuel prices and high demand for slots as the main reasons behind rising freight rates at the beginning of 2022.

As high logistic costs pose significant risks to exporters, experts are calling for immediate actions to defuse the situation, including curbing fuel prices.

“The State slashed fuel tax and offered loans of trillions đồng to the airline industry to lift it out of hardship. Now, it’s time to do likewise to agricultural exports. For instance, the State could grant fuel subsidies to transport firms, processing firms and export firms to help them cut costs,” a logistics expert said. — VnExpress News